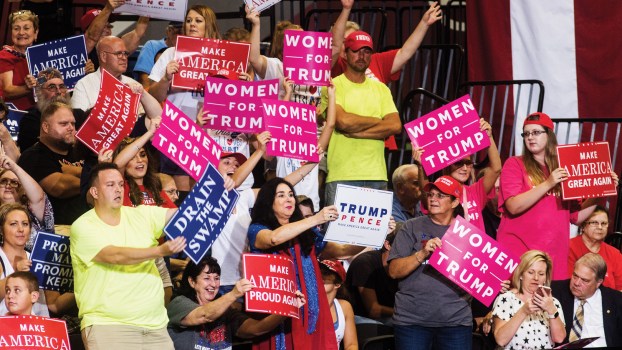 The Tribune/Jessica St. James Attendeess show their support during the Trump Rally at the Big Sandy Superstore Arena Thursday in downtown Huntington.

HUNTINGTON — Numerous Lawrence County residents were in Huntington Thursday for President Donald Trump’s rally at the Big Sandy Superstore Arena in support of the president.

“He’s the president of the United States. It’s a big deal when the president comes somewhere,” Lawrence County Auditor Jason Stephens said as he waited in line to get into the arena. “He’s been to Charleston, but he hasn’t been this close to Lawrence County. My son wanted to come. I’ve seen him before when I went to the inauguration.”

Mary Cogan, South Point councilwoman and treasurer of the Lawrence County Republican Party, said she didn’t want to miss the opportunity to see the president.

“I like what President Trump has been doing, but I would come to see any president to show respect,” she said. “It’s a once in a lifetime opportunity.”

Trump supporters began lining up at the arena very early Thursday, with some even camped out overnight Wednesday. Protestors were also out, although they were kept in another area just across the roadway on the side of the arena.

“I’m here because I’ve never seen a sitting president in person and because I’m American,” Gina Allen, of Chesapeake, said. “I’m also here because I agree with President Trump’s desire to make America a place of hard workers and honorable people.”

Allen was in attendance with her husband, son and brother.

Ironton resident Bob Bradley also said he was there to support the president.

“I think this is a once in a lifetime opportunity to have a sitting president within 20 miles of my house,” he said. “And I support what President Trump is doing. There’s still a lot to work out, but I think we’re moving in the right direction. The economy is on the upswing and there’s a lot of job growth.”

Earlier in the day on Thursday, it was announced that President Trump was going to give a “big announcement” at the Huntington rally, and West Virginia Governor Jim Justice was switching from the Democratic Party to the Republican Party.

“I’ve met people from Lawrence County, Gallia County and Meigs County and some people from Kermit, West Virginia,” Jason Stephens said. “They used to be die-hard Democrats and would work the polls. Now, they’re all for Trump. It’s going to be a good time.”

The Tribune/Heath HarrisonProtestors line up along Eighth Street in Huntington on Thursday to voice their disapproval of the rally by... read more