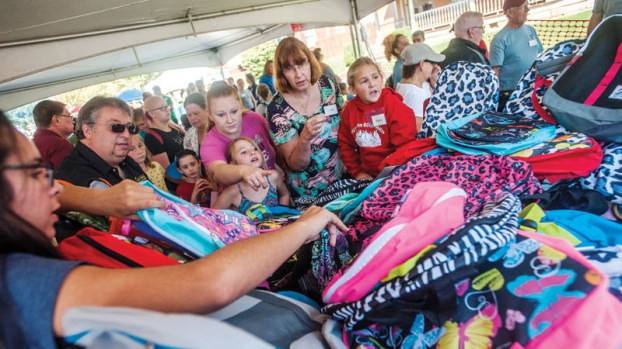 Area children and their parents gather for the Tools 4 School event for school supplies, lunch and a fresh haircut Saturday in Ironton.

More than 1,000 children and their families lined up to receive new backpacks filled with school supplies on Saturday during the 13th annual Ironton St. Paul Lutheran Church Tools 4 School event, which has taken place alongside the First United Methodist Church’s Summerfest for all but the first year.

“We had around 1,800 backpacks filled with school supplies for children in their appropriate grade level,” Wayne Rollins, pastor of St. Paul Lutheran for the past two and a half years, said. “We work with All Saints Lutheran Church in Worthington, Ohio, and they send people down to help out with the event. It’s grown over the years to include other churches, with some churches in South Point hosting a backpack giveaway earlier in the week.”

“It started in the basement of the church, and school supplies were what seemed to be needed most,” she said. “After talking with some teachers, a lot of them said that children not having the necessary supplies to start the school year was a big issue. So that second year was when the Tools 4 School backpack giveaway actually started.”

Backpacks and school supplies for the event were purchased through donations of numerous local businesses and individuals, with children going into grades K-12 able to receive them.

“Around six years ago, there were some grandparents with children they were raising who said they’d have no idea how they’d get school supplies if it weren’t for this event,” Corn said. “That’s what makes this all worthwhile.”

“It’s just grown and grown since we started,” Corn said. “There’s a lot of people involved and the community support has grown every year.”