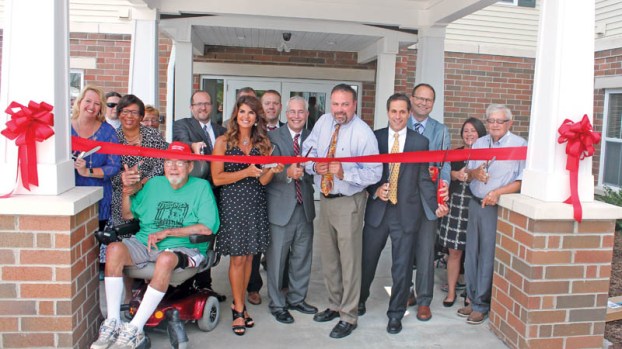 The Lawrence County commissioners, leaders from business partners of the new Proctors Landing senior living complex, and a few residents of the facility before cutting the ribbon at the opening ceremony on Friday.

PROCTORVILLE — Although the new Proctors Landing senior living complex opened earlier this year, an official ribbon cutting and opening ceremony was conducted at the facility on Friday, and featured many who were involved with the project.

The ceremony began with Ralph Kline, assistant director of the Ironton-Lawrence County Community Action Organization (CAO), giving a welcome to the crowd of residents, guests, and community and business leaders, before an invocation by pastor Jason Morris, of the Guyan Valley Missionary Baptist Church.

The program continued with the Fairland High School Brass Band playing the Star Spangled Banner as members of Proctorville VFW 6878 raised the American flag for the first time at the facility before the Pledge of Allegiance.

Following the speakers and the ribbon cutting near the entrance of the building, the ceremony continued inside, where appetizers, refreshments and cake were served and tours of the facility were given.

Proctors Landing contains 56 units, and serves independent seniors 55 and older with incomes between 30 and 60 percent of the median for Lawrence County. Amenities in each unit include Energy Star-rated windows, lighting and carpeting. There are 19 one-bedroom units at 664 square feet, and 37 two-bedroom units at 857 square feet.

Amenities in the building include a large community room with a full kitchen, an outdoor patio, a community garden, raised planter beds, a computer room, a fitness center, a game room, common laundry rooms, tenant storage areas and a space for adult bicycle storage.

Proctors Landing leverages creative designs to better serve both the environment and Lawrence County’s seniors, which brings innovation to the tax credit program.

Kline said this project came together fairly easily with the dedication and support of all involved, adding that he would like to work with PIRHL Developers, LLC for future developments for Lawrence County as well.