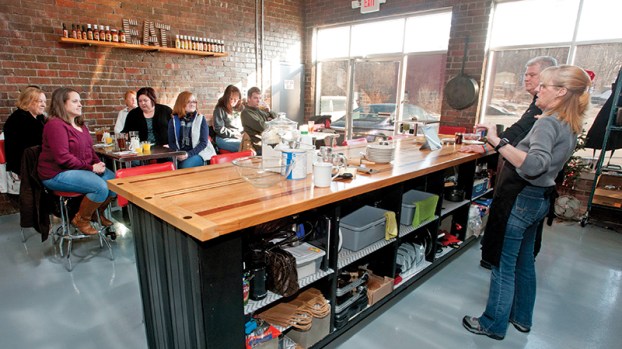 The class is a demonstration, where Sam and Joyce prepare the scheduled meal in front of the audience, in a relaxed atmosphere where the guests are free to ask questions and enjoy the food. Photography by Jessica St. James.

The Gospel of Good Taste

Sam and Joyce Peters have found a way to make a living through having up to 20 strangers over for dinner on a weeknight, and spending a couple of hours getting to know them.

The bi-vocational pastor and his wife have been doing this since June of 2015, when they first opened their Pastor’s Pantry Cooking School in Wheelersburg, Ohio.

Sam describes the class like a cooking show, without getting to cut to a commercial when someone messes up.

“They get to hear Joyce needle me when I mess something up or leave something out,” Sam laughed.

The class is a demonstration, where Sam and Joyce prepare the scheduled meal in front of the audience, in a relaxed atmosphere where the guests are free to ask questions and enjoy the food.

The participants register in advance for the classes through the website,  www.patterfamsauces.com, choosing from a number of classes, including a ladies’ night cooking class, learning how to make fruit and goat cheese salad, orange glazed cedar plank salmon with wild rice and sautéed kale and ginger ice cream with almond cookies for dessert. An Italian date night class is another option, learning how to make a minestrone appetizer, chicken Parnassian, Italian green beans and homemade garlic bread, with a fruit crostata for dessert.

Once a month, a Chef’s Choice class is offered, with a high-end, seven-course production — what Sam calls “food art.”    He describes it as more in line with a 5-star restaurant in New York or L.A. It is a more intimate experience with only four guests, and lasts three hours.

Joyce said they are happy to accommodate any dietary restrictions, and it helps to know about them in advance.

Plenty of other options dot the calendar — a Super Bowl-themed class, a Cajun dinner class, and a brunch class, to name a few — and more are added all the time.

In addition to the regularly-scheduled classes, private events are welcomed. The private events can accommodate from eight to 20 people, with the menu varying with the client’s theme and budget. Sam said people will use the Pastor’s Pantry Cooking School for a birthday party, anniversary, or holiday event, and it is something he and Joyce do not take lightly.

“It’s humbling to us. Out of all the places you could go, and you choose here,” Sam said.

“By the end of the class they feel like they’re in our home,” Joyce said. “They want to stay and help do the dishes. I’m like, ‘No, we are here to wait on you.’ It amazes me. We must make them feel at home.”

The website of the cooking school boasts that they try to share the Gospel of Good Taste.

“We teach them how to be good stewards of the gift of food and being in a community with other people around the table,” Sam said. “We think that makes for a better community and a better world.”

Sam said people have asked him and Joyce why they don’t open a restaurant. But for him, behind the scenes isn’t where it’s at.

“I’m out here in the open. For me, it’s another pulpit,” Sam said. “I feed off the interaction with people. Nothing thrills us more as a couple when, after an evening of class, we have been able to interact with them and watch them learn about food, enjoy the food, and have the emotional experience food should be.”

He said there is something unifying and solidifying about coming around a table with other people.

The Peters’s business has taken off in ways the couple would have never predicted. What started as a simple Jamaican Jerk sauce in May of 2009 that Sam made in his kitchen led to other people asking for it. Interestingly, the name for their sauce business, Patter Fam, came from a two year-old at their church who struggled with saying Pastor Sam, and the name simply stuck, and was used on the homemade printed labels for their early products.

By October, the couple was spending eight hours a day mixing eight kinds of sauces on their stove, and realized they needed to find some help, and found a co-packer to distribute their sauce. But a few years later, that company was bought out by a bigger company, and they were left searching again. He said there weren’t enough micro batch co-packers in the country, and the need led them to their next venture.

“We started our own facility,” Sam said. They found a 7,000 square-foot building and began packaging their own, and doing the same for many other companies across the country, with new clients every week.

“It has continued to grow,” Sam said, “and we sort of just let the business drag us along,” Patter Fam now has between 25 and 30 different sauces to choose from.

In addition to the co-packing, they realized they had another opportunity right in front of them. With more space than they needed, an idea was sparked to begin cooking demonstrations. The Peters had visited a cooking class in New Orleans and decided to try it themselves.

“This was supposed to just be a kitchen lab,” Sam said. “A place for me to play mad scientist. A stove, a sink, a couple tables.”

But the classes took off and have exceeded their expectations. The couple has hosted more than 150 classes since June of 2015, and has consistently maintained 5-star reviews on their Facebook page.

The couple, now in their late 50s, has no intention of slowing down any time soon.

“This is basically our retirement plan,” Joyce laughed. “I think it surprised both of us that it took off the way that it did. We knew that our stuff was good, but we had no idea people would go crazy over it. We never thought it would grow into what it is today.”

When John DeBoard lost his Chow Chow, JoJo in 2002, he wasn’t sure if he’d ever have another dog. “Everyone... read more