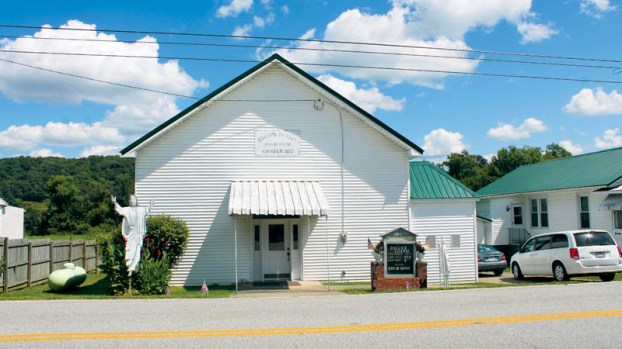 The outside of the Athalia Dillon Chapel on State Route 7. The church celebrates 140 years this year, and is currently the only active church left in Athalia.

ATHALIA — Established in 1877, the Athalia Dillon Chapel is celebrating its 140-year anniversary this year, and had its homecoming this past Sunday, where photos and memorabilia were displayed recognizing the honor.

“The church is still on the same rock foundation,” Ervin Napier, pastor of the church for the past 10 years, said. “We’ve worked on it, and done some upgrades and things, but it’s still the same structure.”

Located along State Route 7, the Athalia Dillon Chapel is currently the only active church in Athalia, and has between 20 and 30 members.

In 1999, Napier said the church purchased the house next door, which is used as a fellowship hall with restrooms, as well as classrooms for Sunday school.

Throughout the years, the Athalia Dillon Chapel has been through its fair share of situations, including the 1937 flood, which Napier said was about three or four feet deep in the church.

“The podium here in the church still had mud caked on it from the flood years afterward,” Napier said. “But it’s refurbished, and it’s the same one we still use today.”

One of the members of the Athalia Dillon Chapel, William Walters, of Proctorville, said there is so much he enjoys about the church.

“It’s a small church where everybody knows everybody,” he said. “Now of days, it seems like all of the big churches are turning more toward what’s going on in the world. But here, we do what the Gospel says, the way it’s always been preached.”

Walters has been attending the Athalia Dillon Chapel since the early 90s.

Napier added that he believes preaching the Gospel the way that it states is what has made the Athalia Dillon Chapel be able to survive for 140 years.

“Here, the Gospel’s preached and is not compromised,” he said. “I think that’s what’s kept us going for 140 years. People see the work and the truthfulness that’s been preached, and we want to see it here for another 100-plus years.”

The Athalia Dillon Chapel was named after its founding pastor, John Dillon.

It was a Methodist church until 1997, when it became an independent, non-denominational church.