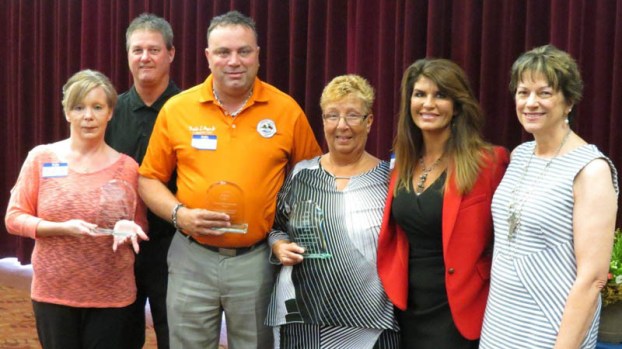 The Annual Area Agency on Aging District 7 (AAA7) Appreciation Brunch at Shawnee State University in Portsmouth late last month saw three awards given to individuals and groups involved in Lawrence County, recognizing them for their service and dedication, not only to the agency as a whole, but for the communities and seniors served by the agency as well.

This year’s “Community Partnership of the Year Award” was awarded to groups and individuals who work together to support positive endeavors and programs for the aging network in the agency’s district, was presented to the Lawrence County Commission, the administration of the Ironton-Lawrence County Area Community Action Organization and Darlene Green, director of the Sybene-Chesapeake Senior Center.

With Lawrence County being one of the three largest counties in the district, providing adequate services can be challenging with a large senior population spread throughout a large geographical area.

The Lawrence County Commission, Green and the CAO were chosen for the award for multiple reasons, including the expansion of the congregate meal program by the CAO in the Chesapeake area, the operation of the Sybene-Chesapeake Senior Center with the leadership of Green, the support of the commission with the offer to build a new senior/community center and EMS station at the county fairgrounds, and the ribbon cutting of the new Proctor’s Landing senior living complex in Proctorville.

“The award reassured us that we are doing well for our seniors. We have an aging population that is growing and that is a great thing,” Commissioner DeAnna Holliday said. “The commissioners are very attentive to the needs of our seniors, and we take our responsibility to them seriously. We are fortunate to have the leadership of Darlene Green. She is the voice of the seniors and we always hear her loud and clear. She does a phenomenal job, and it was our honor to be recognized for being accomplished in this very important part of our job.”

This year’s “William A. Jenkins Award,” awarded to an outstanding contributor to the Southern Ohio aging network, was presented to Green, who said she was very surprised to be given the honor.

“I was so shocked when I received this award,” she said. “I knew about the one I was getting with the commissioners and the CAO, but this one was a total surprise.”

She added that it was an honor to receive the award, out of people involved in 10 counties the agency received, but that she was very appreciative of it.

During the award presentation, AAA7 Assistant Director Nina Keller acknowledged Green for her many years of dedicated service to the aging network and seniors in Lawrence County, including her long-tenured work at the Sybene-Chesapeake Senior Center, her organization and help to provide a place for seniors to gather in the eastern end of the county and her work with starting Lawrence County Senior Day at the fairgrounds each May.

“Her dedication to helping provide and make possible senior care services in the eastern end of the county has made a difference for so many,” Keller said.

Ohio Rep. Ryan Smith, R-93, presented AAA7 Executive Director Pamela Matura with a special commendation from the Ohio House of Representatives for her many years of service.

Smith was also awarded the “Legislator of the Year Award” during the ceremony.