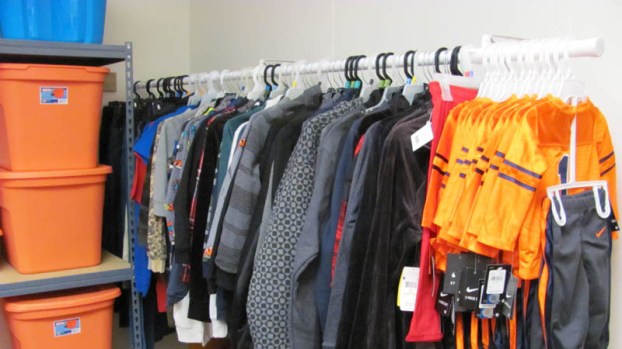 Clothing and bins filled with items donated to Operation GRACE in Scioto County. The program was started by LSSWD Director Dan Palmer to help children affected by the drug epidemic receive necessities that they do not have.

Program in Scioto County, likely to begin in Lawrence

“Last year, I attended an opioid conference in Columbus by Ohio Attorney General Mike DeWine, and it opened my eyes to a lot of things,” Palmer said. “The drug problem in Scioto and Lawrence counties is extremely bad. A lot of people talked about what we can do for the addicts, but I was worried about the kids who are affected by this and wanted to do something to help them.”

Palmer said he started the program in Scioto County after talking to teachers, principals and superintendents from all of the public schools in the county, as well as the Scioto County commissioners.

“The teachers and school officials told me that some of these kids don’t even have basic essentials like a toothbrush, toothpaste, soap and deodorant,” Palmer said. “This program provides those things to kids who need them.”

Palmer provides the teachers in Scioto County with a form containing items that have been donated to the program, in which they then fill out what is needed by their affected students.

Palmer said Scioto County Commissioner Bryan Davis also provided a room inside of his business in downtown Portsmouth for Palmer to use as a place to keep all of the donated items, which he added were continuing to grow.

“This has just gotten bigger and bigger since it was started last year,” Palmer said. “It really says a lot about the generosity of the people in Scioto County and this region.”

Palmer added that he has gotten donations to Operation Grace from individuals and businesses in Scioto County, Lawrence County and even Huntington.

As an offshoot of Operation GRACE, Palmer, along with Scioto County Juvenile Judge Alan Lemons and Dr. Kevin Howard and Mike Wirzfeld, in occupational medicine, both from Our Lady of Bellefonte Hospital, began speaking about the drug epidemic to all of the public Scioto County high schools from each of their points of view. This year will be the second year they will continue doing this, making stops at Clay, Green, Northwest, Portsmouth, Portsmouth West and Portsmouth East high schools throughout the rest of September and October.

Palmer said that with the success of Operation GRACE in Scioto County, he is looking into bringing the program to Lawrence County as well, though adding that he does not want to be the one who is in charge of it, but he will help out.

He added that he is currently looking at candidates who could start the program in Lawrence County, and that although no one has officially been named, it is “likely” something that will begin in the near future.

“I truly believe that if we don’t do anything about this, we’ll lose this generation of kids,” Palmer said. “We have to be proactive and address this situation.”

Dawson-Bryant schools contribute to effort Two trucks from BWC Trucking in Hanging Rock have already made the journey to Texas... read more