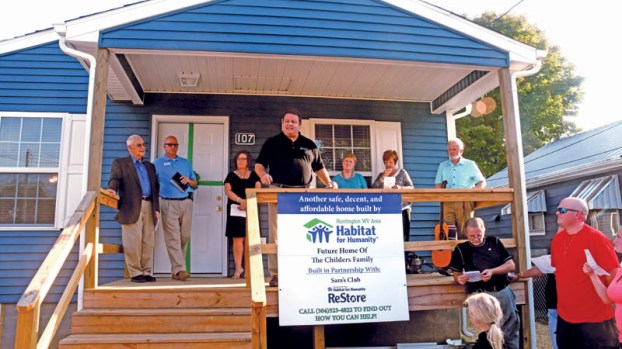 Huntington WV Area Habitat for Humanity Board President Rob Johnson speaks at the dedication of the organization's 100th house Monday evening. The house is now the home of the Childers family of four.

Located in Proctorville, now the home of Childers family

PROCTORVILLE — The Huntington West Virginia Area Habitat for Humanity dedicated its 100th house to the Childers family of four during a ceremony at the home Monday evening.

Dayna Massie, resource development manager for the Huntington Area Habitat for Humanity, welcomed the crowd before Associate Pastor of Crossroads United Methodist Church Bill DeMoss gave an invocation and Gary Prater sang and played his song “Habitat, it’s You and it’s Me” on the guitar.

Huntington Area Habitat for Humanity Board President Rob Johnson then spoke about the impact Habitat has made and all those who have made it possible.

“It’s awesome to see so many different groups who want to help so many people,” he said. “…It’s an impressive legacy.”

The ceremony continued with the Childers family accepting a donation from Facing Hunger Food Bank by executive director Cyndi Kirkhart and an American flag from Jon Nelson, of WoodmenLife Insurance before Huntington Area Habitat for Humanity executive director and CEO David Michael presented them with a Bible and the keys to the home.

“We are so excited to celebrate the dedication of our 100th house,” Michael said. “We started building affordable homes for local families in need in 1990, and we know that it won’t take us another 27 years to build the next 100 homes. We couldn’t have reached such a milestone without the underlying support of our donors, volunteers and staff. We are so thankful to our Habitat family.”

Michael added that although this was only the organization’s second home in Lawrence County, it’s the second of many, before speaking about the growing relationship between the Huntington Area Habitat and Collins Career Technical Center that started in 2014. He also mentioned that all of the Habitat homes are Energy Star Certified.

The Childers family, Jonathan, his wife Mindy, and their two daughters, Hartley and Delaney, were very excited to be able to accept the new Habitat home.

“It’s a blessing,” Jonathan Childers said. “It’s been about a five year struggle, but it’s been a blessing. With patience and trusting in the Lord, he has blessed us with a new home.”
The Huntington West Virginia Area Habitat for Humanity is a non-profit, ecumenical, Christian ministry, whose mission is to partner with qualified families in need and provide them the opportunity for safe, decent and affordable housing.

For more information on how to become involved or volunteer, please call 304-523-4822, visit www.hahabitat.org or follow its Facebook page at Huntington WV Area Habitat for Humanity.

PROCTORVILLE — A pancake breakfast fundraiser is set for Saturday to help benefit a Lawrence County woman who is battling... read more