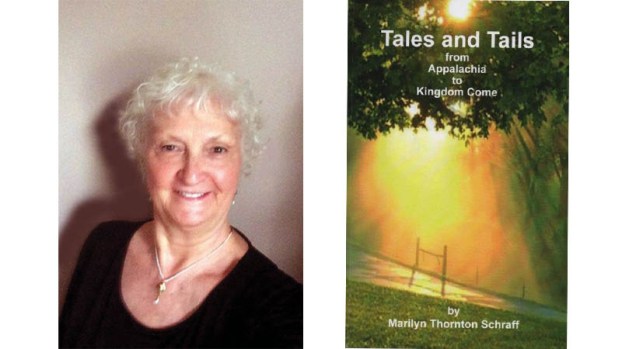 Author Marilyn Thornton Schraff will be at the Briggs Lawrence County Public Library in Ironton on Saturday for a book signing, and to promote her fifth and newest book “Tales and Tails: From Appalachia to Kingdom Come.”

Schraff, who was born and raised in Kitts Hill before moving to various other parts of the state, said the themes of her books focus on life in the Appalachian region of Ohio.

“This book has 13 poems, numerous short stories and more than 50 photos,” she said. “A lot takes place in the Appalachian area of Ohio, but I’ve also lived in Columbus and Cleveland, where a couple stories are also from.”

She added that in her poems and stories, she likes to compare the differences between areas that she’s lived.

Schraff’s first book, Appalachian Childhood, is filled with stories from her childhood in Lawrence County, her second book is about the moonshiners who were tied to her family in Lawrence County, her third book, Appalachian Journey, is about people who have inspired her throughout her life and travels, and her fourth book is about the history of Kitts Hill.

“I like to use a lot of humor in my stories, and this book was written at the request of my readers,” she said. “When people read my books, they let me know what they want to read more about, and it keeps me writing new books.”

Schraff, who now resides in Marion, said she attended grade school at Kitts Hill before continuing at Rock Hill once the two school districts consolidated. At 14, her and her family moved to Ironton, where she graduated from Ironton High School. From there, she went on to receive her Bachelor’s and Master’s Degrees in education from Ohio University.

Besides writing, Schraff said she is also very interested in genealogy, learning that she is an ancestor of both King William I, of England, also known as William the Conqueror, and King Louis IV, of France, as well as having direct descendants from every war the United States has fought in. She is also an avid painter who has won numerous awards for her watercolor paintings, which have also been exhibited on five continents.

“I didn’t like history at all when I was in school,” she said. “But the older I got and learning about my genealogy, I have a much greater interest in history because a lot of it directly involved my family.”

She said that, through all of her life’s journeys, she still recognizes Lawrence County as home, and added the people of the county are what make it great.

“The people of Lawrence County are the finest people I’ve ever met. Even though I’ve lived in Columbus and Cleveland, I’m still a country girl at heart, and I just think those people are wonderful,” she said. “Whenever I write a new book, I always go to Ironton first. Lawrence County is where my heart is.”

All of Schraff’s books will be available for sale at the book signing as well as some of her paintings on display with small prints also for sale.

The book signing will be 1-3 p.m. Saturday at the Ironton Lawrence County Briggs Library.

Her books are also for sale on her website, www.thorntonhousepublishing.com.

CLEVELAND (AP) — Officials say they are shutting down a service that helps Ohio residents enroll in Medicaid. The Plain... read more