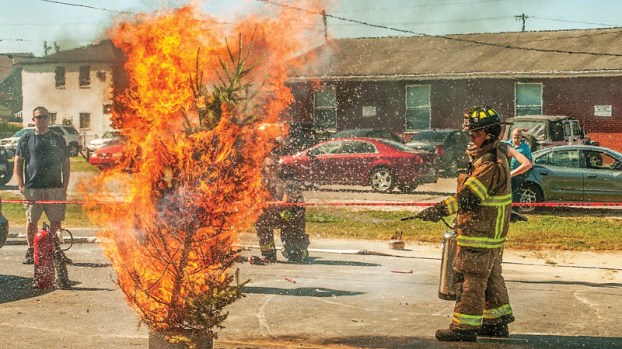 The event, which is put on by the department’s auxiliary, goes along with National Fire Prevention Month, and started off with a parade before demonstrations and activities began.

Demonstrations on Saturday included putting out a Christmas tree fire and a mock car accident fire, and explaining to the crowd what to do in the event of each. Other demonstrations the department has done in the past include stovetop and dryer fires as well.

“We had quite a few people who attended this year,” Jay Sherman, Coal Grove fire chief, said. “Everyone had a good time.”

Sherman added that at the end of last week, the department conducted its annual coloring contest for the Kindergarten through fifth grade students at Deering Elementary School, in which the winning posters were displayed at Fire Safety Day.

The winning students for each grade also received a new bike and helmet, which were provided by the fire department through donations.

As part of Fire Safety Day, the fire department auxiliary provided a free lunch of hot dogs, chips and drinks, along with baked beans from Debbie Rogers of the Lawrence County Historical Society.