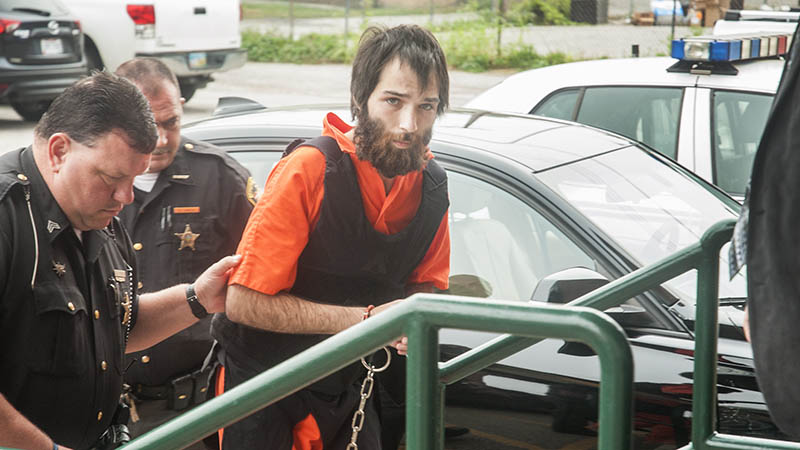 Currently being held without bond

Family and friends of the four victims of a quadruple homicide in Decatur Township this week packed the Ironton Municipal Court Saturday morning as suspect Arron Lawson, 23, of Pedro, appeared for his arraignment in front of Judge Clark Collins Jr.

Collins read Lawson the charges against him, which include one count of failure to comply with the order or signal of a police officer, a third-degree felony, and three counts of murder and one count of aggravated murder, all unclassified felonies.

Lawson said he understood the charges against him and the penalties associated with such.

The three murder charges come from the killings of husband and wife, Donald McGuire, 50, and Tammie McGuire, 43, both of 15830 State Route 93, Pedro, and Stacie Jackson, 25, of 15497 State Route 93, Pedro. The aggravated murder charge comes from the killing of Jackson’s 8-year old son, Devin Holston, because he was intentionally killed under the age of 13.

Lawrence County Prosecutor Brigham Anderson said he intends to seek the death penalty against Lawson due to the nature of the case.

“We intend to pursue the death penalty,” Anderson said following the arraignment. “We have four different murders we now believe occurred throughout the day on Wednesday, and they were premeditated.”

Anderson added that the investigation is still ongoing, and what authorities believe is the motive in the case is not being released at this time.

Lawson, who will be represented by attorney Warren Morford, is currently being held without bond, with a no bond hearing set for 3 p.m. Monday at Ironton Municipal Court.

Anderson said the last time there was a death penalty case in Lawrence County occurred in 2005.