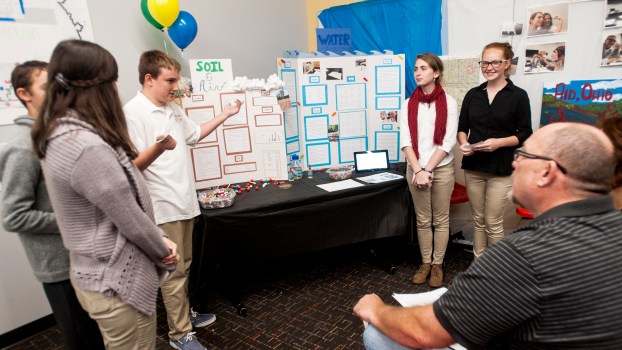 Jessica St. James/The Tribune Students from the Tri State STEM+M School are evaluated on their water, air and soil projects during a special presentation event on Thursday.

SOUTH POINT — Students at the new Tri State STEM+M Early College High School presented the findings of their studies of water, soil, and air in the Tri-State to community leaders, business partners, university partners and school board members on Thursday.

The project, “A River Flows Through,” was part of the school’s environmental orientation coarse and 14 teams of students were each assigned a tributary of the Ohio River to study.

At Thursday’s event, each team presented their findings to panel of guests from the community, who asked questions and scored their work.
Both creek and tap water from the region were tested and students used United States Geological Survey maps and Google Earth to look for potential polluters from industry and the population.

The faculty said the students were somewhat surprised when they found the water from the tributaries is relatively clean, despite the Ohio being named one of the most polluted rivers in the nation.

“We found our creek wasn’t really polluted,” Stevens said. “We found the creek and tap water had a lot in common. However, there were no phosphates in the creek, but there was in the tap water.”

“The tests were negative for iron,” Zornes said, noting it was unusual because a lot of soil and rocks here have significant amounts of iron.

“We tested the tap water, and we got a sample of soil from the area and tested it, too,” Runyon said. “The tap and creek water were healthy. Also, the soil was.”

“We used different solutions and tested for different chemicals,” Schraeder said. “Phosphate and hard water were present. All else were negatives.”

One of the panel judges was Mary Cogan, local businesswoman and member of South Point’s village council.

“I absolutely love this,” she said. “The kids seem so energetic. They know their topic. They’re learning so many things, so differently. I would have loved to have had this opportunity growing up, or for my kids.”

Jayshree Shah, the school’s director said things have been “going great” since the school opened its doors to its first students in August.

“The students amaze me,” she said. “They work together and pull it together. There’s so much excitement.”

She said there is another project planned for the next nine weeks, in which students will be asked to design a “green city,” and build a model of an environmentally sustainable urban environment. They will present their results sometime in December.

Shah said an informational meeting to provide information for prospective students and parents will take place at the school at 7 p.m. on Nov. 7.