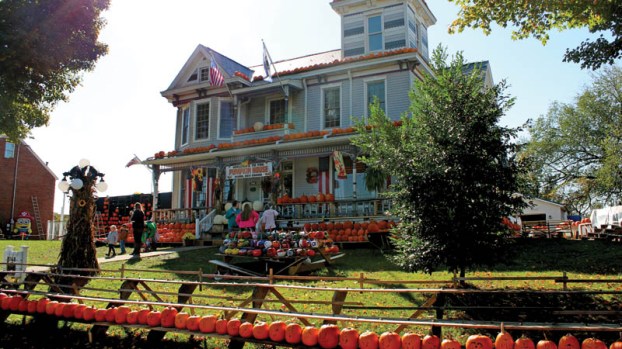 The Pumpkin House in Kenova, West Virginia, features around 3,000 pumpkins and is a Halloween season staple in the Tri-State.

KENOVA — Around 3,000 pumpkins decorate Ric Griffith’s pumpkin house each Halloween season, bringing in visitors from all over the Tri-State and even the country.

The pumpkin house has been at its current location since 1991, and Griffith said it’s something that he looks forward to and enjoys each year.

“The thing I enjoy the most about putting on the pumpkin house is all of the wonderful volunteers,” Griffith said. “We get about 1,000 people from all over the Tri-State who just walk back to the backyard and say ‘how can I help?’”

He added that many of the young children who volunteer scoop out the pumpkins to be ready for carving, while the older children assist carrying the pumpkins and setting them up. Around 20 volunteers do all of the cutting and carving.

The display features several themes, including a musical wall with about 540 pumpkins, complete with pumpkins carved as an orchestra and a choir, along with special effects, and a section honoring our country with each of the past presidents and other historical figures.

Griffith said part of the musical wall also has a math quiz, set up by the Marshall University Math Club “Thundering Nerds,” in which high school students attempt to solve for prizes.

The first year of the current pumpkin house Griffith set up about 500 pumpkins. In 2000, Griffith ordered 2,000 pumpkins to celebrate the new millennium, and the next year he ordered 3,000 after the volunteers jokingly complained about the 2,000 pumpkins the year before.

“They didn’t say anything after I ordered 3,000,” Griffith said jokingly. “And that’s how many we still use today.”

All of the pumpkins get delivered to the house around the first week of October, at which point Griffith and his daughter begin to pre-draw the designs. About a week before the last weekend of the month, the cleaning, carving and decorating begin.

With 3,000 total pumpkins and a week to have them ready, Griffith said around 500 pumpkins are completed and set up each day for a week leading up to October’s final weekend.

Griffith and his pumpkin house have previously been featured on HGTV, the Travel Channel, Ellen, the Today Show and more.

The house is located at 748 Beech Street in Kenova, West Virginia, and will still be set up at least a few days following Halloween.

The attraction is free and open to the public.

The two men vying for the position of Ironton Municipal Court judge stated the case for their candidacy at a... read more