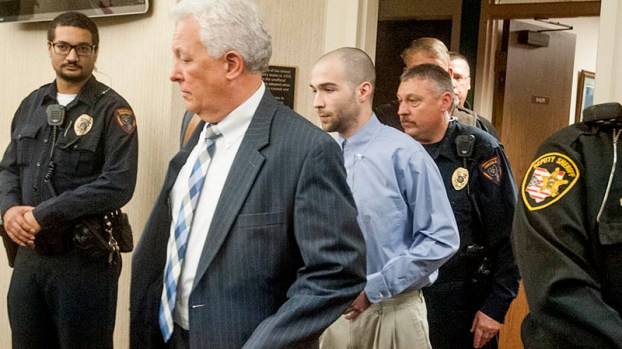 Arron Lawson, 23, of Pedro, suspect in a quadruple homicide in Decatur Township last month, makes his way into the Lawrence County Common Pleas Court Friday afternoon with his attorneys and court security for a pretrial. A trial date was set for Monday, Aug. 6, 2018.

A trial date is set for the suspect in a quadruple homicide in Decatur Township last month.

Arron Lawson, 23, of Pedro, appeared in Lawrence County Common Pleas Judge Andy Ballard’s courtroom for a pretrial Friday afternoon, where the state and defense went over final matters before preparing for the trial.

Lawson is accused of killing husband and wife Donald McGuire, 50, Tammie McGuire, 43, their daughter, Stacey Jackson Holston, 25, and her son, Devin Holston, 8, before a two-day manhunt ensued to capture him.

The state is represented by Lawrence County Prosecutor Brigham Anderson, who said he fully intends to seek the death penalty in the case, and Angela Capena, of the Ohio State Attorney General’s Office Special Prosecutor’s Unit.

Lawson is currently being held without bond.

From design to construction