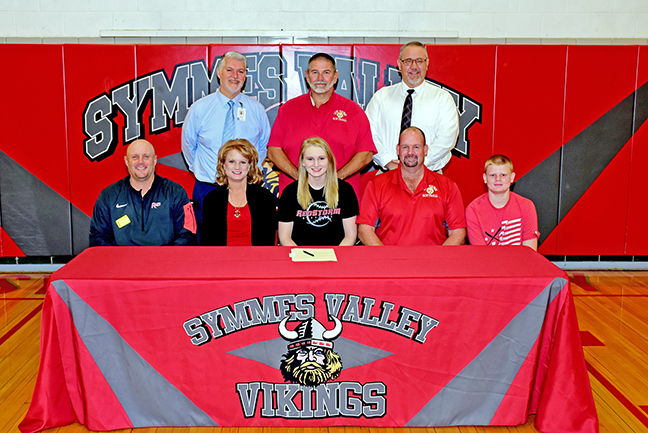 WILLOW WOOD — As a baby, Taylor Webb probably cut her teeth chewing on a softball.
Being introduced to the game at an early age only continued to grow through the years along with her.
“Ever since I can remember softball has been my favorite. I watched it on TV and I watched the World Series. I’ve wanted to play it and I put it front of the others sports,” said Webb.
The Symmes Valley Lady Vikings’ senior put it in front of the others sports this week when she signed a letter-of-intent to play softball at the University of Rio Grande next fall.
Webb selected the RedStorm over several schools including Shawnee State, the University of Charleston, Northern Kentucky, Findlay and Ashland.
“When I went visit Charleston I was in a city. It wasn’t a huge city but it was different than what I was used to. I went to Rio and it felt more like home. It was more like living in the country,” said Webb.
Rio Grande finished 20th in last year’s NAIA poll. Head coach Chris Hammond said he was excited to have Webb signed and sealed for next year when she continues her education.
“Taylor is an exceptional young lady that comes from a great family. We expect her to make an immediate impact to our team. She sprays the ball all over the field with her bat,” said Hammond.
“Defensively, she is an outfielder that covers a lot of ground and has a strong arm. Taylor has good speed and is aggressive on the bases. We are looking forward to her arrival next fall.”
Webb had a .636 batting average with eight home runs, 43 runs batted in, 12 doubles and four triples last in being named the Southern Ohio Conference Div. I Player of the Year. A three-time All-Ohio selection including second team last season, Webb struck out just once all last season.
For her career, Webb is hit .607 with 12 home runs, 105 RBI, 35 doubles, 14 triples and just six strikeouts.
Lady Vikings’ head coach Jeff “Odie” Estep had nothing but praise for Webb.
“She’s a heck of an athlete. She’s a good fit for Rio Grande. She’ll step right in and fit in well there. She’ll make their outfield better,” said Estep.
“She’s one of the better athletes I’ve coached. And a big thing about Taylor is she is very smart about the game. She has great savvy and instincts.”
Webb knows playing at the college level will be an adjustment.
“I’m going to have to hit the gym more and work more during the summer. When we stated workout s in fall I’m excited to do that because it’s go, go, go when you hit college,” said Webb.
Even though she can play all three outfield positions, Webb was being recruited as a centerfielder.
“(Hammond) said the opportunity was there but he never fully came out and said anything. He said they were looking for outfielders in my graduating class,” she said.
Webb was an outstanding volleyball player and she has also played basketball. She admits that she continued to work on softball even while playing another sport.
“In the winter, I lifted weights and I went to an open gym on a couple of Sundays. I go hit by myself. I play travel ball and that’s pretty much all summer long. A couple of times in volleyball season I go hit on my own,” said Webb.
Sitting around isn’t in Webb’s personality. Late last spring during softball season she suffered an appendicitis and had surgery on a Thursday.
The team played two games in Columbus on Saturday and she talked her father into making the trip to watch.
“Sitting out was really hard. I was going to leave and come back. Went up to Gahanna Lincoln and I found myself standing there and picking up bats. I even threw a softball Sunday. I said, ‘Dad, I think I can pass and hit.’ I didn’t feel any pain.”
The doctors told Webb she could do anything depending on how much pain she could endure. She had her father, football coach Rusty Webb, take her to the softball field to hit. He had coach Estep approve the minor workout.
“The pain went away after Saturday. It didn’t hurt, but I had restrictions. They weren’t my restrictions, they were my dad and Coach Estep,” she said.
Webb — who plans to major in Early Childhood education — knows talent and hard work have helped her, but she was quick to thank her coaches and teammates.
“My summer travel coach Bob Malone. Odie has worked with me ever since I can remember. They both have helped me a lot,” said Webb. “Joe Martin always helped me and he always encouraged me. He was always straight forward.
“And I have to thank my teammates from high school and travel ball. They made it fun and always encouraged me and pushed me to be better.”
Taylor is the daughter of Emily and Rusty Webb.