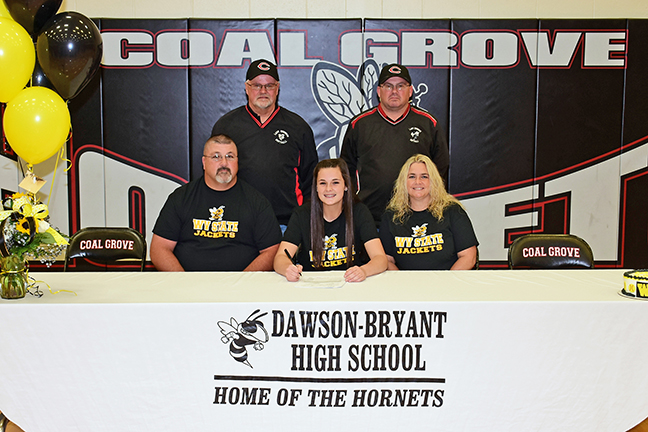 COAL GROVE — Kasey Murphy wants to work her way up the pitching ladder for West Virginia State.
Considering where she’s at right now, it won’t be much of a climb.
The Coal Grove Lady Hornets’ senior All-Ohio softball standout will begin her climb next fall after signing a letter-of-intent on Wednesday with the NCAA Division II West Virginia State Yellow Jackets.
Murphy was recruited not only as a pitcher but as an outfielder and she hopes to do both.
“I’m hoping I can work my way to one of their top pitchers, one of their one, two and three’s,” said Murphy. “I like pitching (the best).”
Lady Hornets’ head coach Wayne Kellogg thinks Murphy will be able to play every day whether she’s pitching or in the outfield.
“She can pitch and play the outfield. She has real good speed in the outfield. She’s led the team the last three years in batting average.
“She is our leader on the field. She’s a great pitcher. She throws the ball where we want her to throw it.”
Murphy entertained offers from Glenville State, Tiffin and Cedarville before settling on the Yellow Jackets.
“It’s just a good fit for me. It’s far enough from home and close enough to come home,” said Murphy about her decision.
Murphy was just selected to play in the Gatorade Junior All-American Games Nov. 24-26 in Venice, Florida.
The selection was based on her high school career that has posted some impressive numbers.
In three seasons, Murphy has a .573 batting average, a school record 14 home runs, 84 runs batted in, 31 doubles, four triples and 127 singles.
As a pitcher, she was 18-8 last season with 302 strikeouts as she led the Lady Hornets to their first-ever sectional championship.
She has been a first team All-Ohio Valley Conference pick all three seasons. She was honorable mention all-district as a freshman and first team the past two years.
Murphy was All-Ohio honorable mention as a sophomore and second team as a junior. She played in the Underclassmen Tournament for Division III as a freshman and sophomore and played in the All-District All-Star Game last season.
Besides her high school career, Murphy has played travel ball for coaches Mitch Crum and her father, Bill.
Playing in the high school division with the 18U Crush, Murphy hit .560 with 24 home runs and 138 RBI. She also had 164 singles, 43 doubles and 10 triples. As a pitcher, she struck out 291 batters.
“It’ll be really overwhelming. It’s different. There’s older girls and younger ones. It’ll be different.
Besides softball, Murphy is a three-year letter winner in volleyball and basketball, too. She was All-OVC as a junior and senior in volleyball and all-district second team the past three years.
A second team All-OVC in basketball last season, Murphy led the team in offensive rebounds as a sophomore and had the most total rebounds as a junior.
Kellogg has been impressed with Murphy both on and off the field during her career.
“You couldn’t ask for a better student-athlete. She’s a big reason along with the other six seniors on this team for our success. She’s the heart of this team, that’s for sure,” said Kellogg.
Kasey — who plans to major in psychology — is the daughter of Bill and Shanna Murphy.