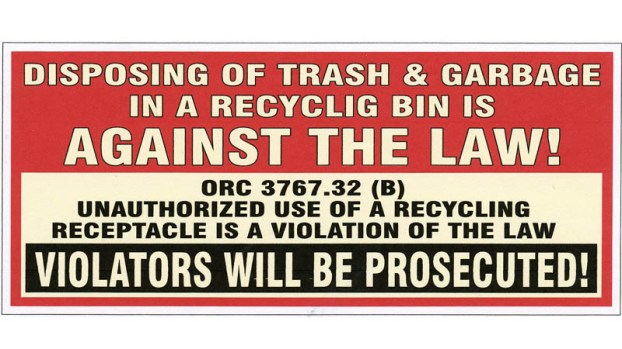 One of the new signs that will be placed on the recycling bins at the Walmart/Sam's Club location in South Point.

Commission to send letter to city of Huntington

Lawrence-Scioto Solid Waste Management District Director Dan Palmer spoke about the issues the district has been having at its Walmart/Sam’s Club recycling location in South Point at the county commission meeting on Tuesday.

He said that last Wednesday, he conducted his own informal survey of people taking advantage of the site, and reported that out of 61 cars that came by while he was there from 11 a.m.-3 p.m., 39 were from West Virginia, 19 were from Ohio and three were from Kentucky.

While asking questions to West Virginia drivers, the top four answers to why they recycle at the location were that it was free, the convenience of the location as they already shop at Walmart or Sam’s Club, they don’t want to pay the $75 a year fee to recycle in Huntington, and that recycling in Huntington is virtually gone.

Palmer said that it bothers him that so many West Virginians are taking advantage of the site, and followed up with asking if it concerns them that the residents of Lawrence County are taxed in order to provide the recycling bins. The top answers he received were that they were not aware and thought the county provided them, and that there are no free recycling sites in Huntington any longer.

The last question he asked West Virginia drivers was if they were aware that many West Virginia residents are contaminating the site with garbage, furniture, carpet, mattresses, tires and other unacceptable items, to which the top responses were that they read that in the newspaper and that they were sorry to hear this.

He added that with so many people taking advantage of the site, the bins are filled up and need replaced very frequently, and with so many unacceptable items, often times things are just left on the parking lot ground near the bins and not inside of them. After talking to the managers of both Walmart and South Point, Palmer said the district is now in danger of losing the recycling location.

Palmer then talked about one instance earlier in November, where a Huntington resident was caught by the district dumping blankets and mattresses in the recycling bins at the site.

Samuel Egan, of Huntington, West Virginia, was found guilty of the offense in Lawrence County Municipal Court, and Judge Donald Capper sentenced him to five days in jail suspended, one year probation, and ordered him to pay a $200 fine, $169.29 in restitution to the district, $125 in court costs and complete two days of community service.

The commission said it would help out in any way that it can, and that they would send a letter to Huntington Mayor Steve Williams regarding possibly making recycling more available in Huntington. Commissioner DeAnna Holliday also added that if that doesn’t work, Lawrence County Commission may have to attend a few Huntington City Council meetings in the future to try and get the issue taken care of.

Palmer added that new signs would be placed on the bins in order to try to improve the issue of trash and other unacceptable items being dumped there.

Holly Tucker, chief of the Southeast District Office of the Ohio Environmental Protection Agency (EPA), also spoke to commission about the work that the agency does and resources that are available in order to help with financials for EPA-mandated projects or other issues that the agency can assist with.

Lawrence County Treasurer and head of the county land bank Stephen Burcham gave an update on the land bank, and said that house number 59 on Rockwell Ave. and house number 60 in Coal Grove were demolished on Tuesday.

• Approved the insurance stipend for the employees that do take the county insurance.

• Approved the wage increase for Paramedic Steve Rigney to the Paramedic level, retroactive to Sept. 24, 2017.

• Met in executive session with Keith and county chief deputy auditor Chris Kline regarding real estate. No action was taken.

The next commission meeting is 11 a.m. Thursday in the commission chambers on the third floor of the courthouse.