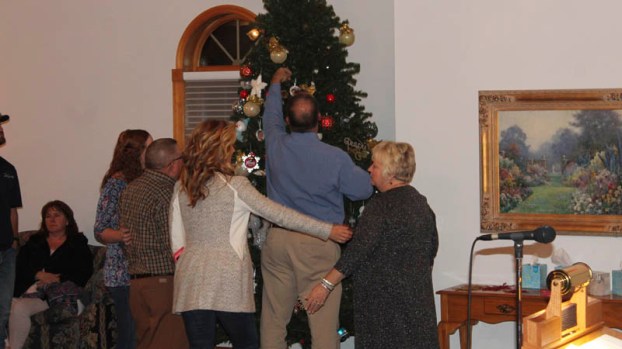 Community members gathered at Hall Funeral Home Friday evening for the annual holiday service event to remember those who have died this year. The program is designed to help families cope with lost loved ones during the holiday season.

A service to remember loved ones

PROCTORVILLE— As it has for just under two decades, Hall Funeral Home continued its annual holiday tradition of a service on Friday evening to remember all of those who have died this year.

This was the 18th year of the service, which Ernie Hall, co-owner of the funeral home with his family, says helps families cope during the holiday season after losing a loved one.

Hall gave an opening greeting to the around 100 people who attended, followed by a prayer by Ryan Summers.

Angie George, who sang at the ceremony, continued the program with special music before Evan Hall, Ernie’s brother and another co-owner of the funeral home, introduced pastor Brady Lipscomb, of Eastwood Baptist Church in Huntington, West Virginia, who was the speaker at the service.

Lipscomb talked about dealing with the loss of a loved one, but said it is better to think about all of the memories and good times rather than that they are no longer here.

“This is important because it allows families to identify with each other’s losses, and also remember the memories that have been left to us by our loved ones to remember them by,” Lipscomb said. “I always tell families not to look at the empty chair just as an empty chair, but rather look at it as a chair full of memories.”

Evan Hall proceeded with the program by reading the list of names of those who have died this year, as family members came up to place ornaments on the Christmas tree in remembrance.

After all of the names were read and the ornaments were placed, the tree was lit, and the program concluded with George singing a closing song and a benediction by Summers.

The ceremony was followed with refreshments and a reception.