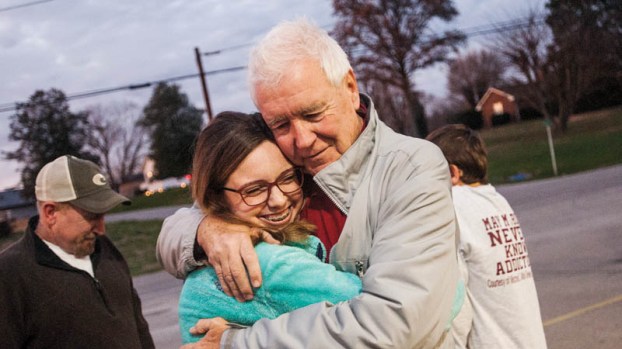 “Now of days, what I’ll miss most is not so much the patient care and direct treatment, but now it would be missing the innovations and the things that we’re continuing to see improve over the years,” Fry said. “Going from running out of this building (Rome Township Fire Department) in 1973 and not having nearly what we have now, and thinking how much more there will be in five years that I won’t be a part of is what I’m really going to miss. But it’ll benefit the people of Lawrence County, which is what this is all about.”

He said he was also very thankful for the EMS levy passing this past election, adding that the agency will now be secured for the future.

“EMS is not going to take any steps back,” he said. “Every step now is going to be forward.”

Fry added that he was very surprised about the party, and it wasn’t something he expected to happen.

“I figured there would just be something at the commissioners’ office,” he said. “But I didn’t expect anything this big.”

“My first experience dealing with Buddy was with the National Wild Turkey Federation. I was always so impressed with how he could lead and coordinate and bring people together,” Commissioner DeAnna Holliday said. “When I became a commissioner and started dealing with him on this level, he hasn’t let me down and continues to impress with his ability to lead.”

“Buddy is a true professional. He has taught us so much about EMS and how it should be run,” Pratt said. “Because of him, we’re in a better position to lead the agency, but he’s still going to be very hard to replace.”

“I’m very happy to congratulate Buddy on his retirement, and we hate to see him go,” he said. “He’s a great leader who got the EMS where it is today, and he’s a first-class citizen.”