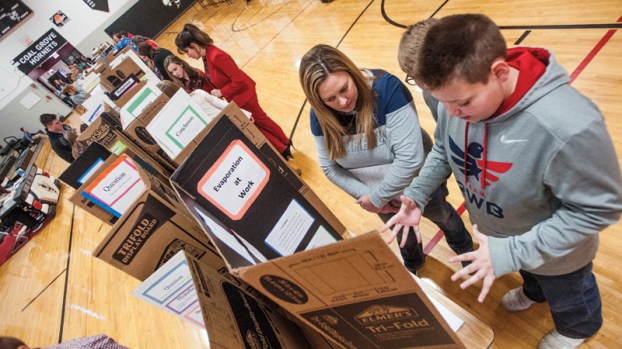 DBMS had science fair on Friday

Over 200 participated in annual event

COAL GROVE — Dawson-Bryant Middle School had its annual science fair on Friday, with winners of superior awards having their projects entered into the Lawrence County fair.

Students chose to either work on their projects by themselves, or with another as a team of two. The projects were displayed in the gym throughout the day, with judging taking place and the awards handed out before school letting out. Wide ranges of topics were chosen as well.

“My project was about candy confusion, where children mistake medicine as candy,” she said. “My hypothesis was correct that four out of six kids would mistake medicine for candy. With just one look, a child could take medicine that they thought was candy, and I just wanted to make people more aware.”

She added that she is very happy to be able to take her project to the county fair as well.

Kennedy Keaton and Kelsey Fraley, seventh graders who worked on their project together, earned a team superior award.

Fraley added that the pair had a good time working on their project.

“I’m kind of nervous about the county science fair,” Fraley said. “But we’re looking forward to it.”

Howard said that the science fair teaches so much to the students beyond just what their projects are about.

“We’re really proud of the kids. It’s a great opportunity for them to do something fun and learn more about something their interested in,” she said. “It teaches responsibility, personal and social skills, interviewing skills and more. It’s just a good overall experience for the kids.”

The Lawrence County Science Fair will take place sometime at the beginning of February.

Ringing in the season