Students give back for holiday 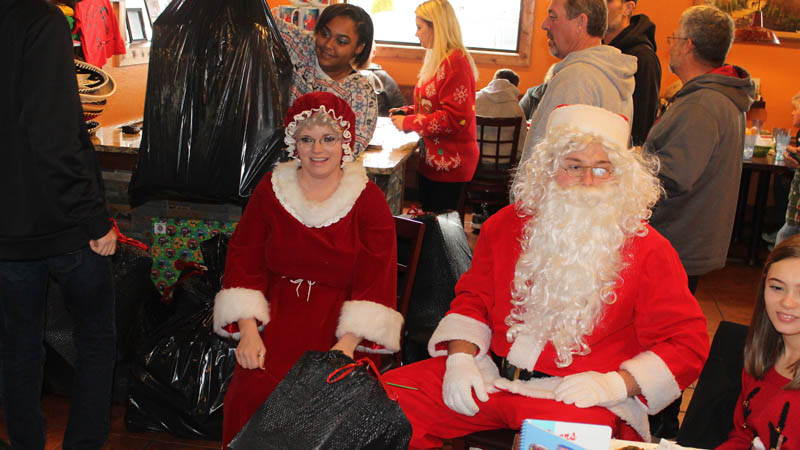 The project has been going on for approximately 15 years, and involves the juniors and seniors of the high school’s Mu Alpha Theta math honorary, Rho Kappa history honorary and student council. This year however, only the seniors participated due to the large number of students.

“We were able to put around $7,500 back into the community through donations, fundraisers and grants,” Kent Stewart, South Point High School history teacher and event organizer, said. “Each kid was paired up with a high school student to shop for new clothes at Walmart and then we come here to Casa Grande for lunch. Santa and Mrs. Claus surprise them with new shoes and toys as well.”

He added that the principals of each elementary school give him a list of 10 students in need to participate in the event.

After lunch, Santa and Mrs. Claus, along with other high school students helping out as elves, surprised the children with bags of toys and shoes.

“I like giving back to the kids who don’t have much around this time of year,” senior Hannah Burcroff said. “It’s very rewarding to be able to make their Christmas better.”

“I was very excited to be picked to be a part of this project. I know that this time of year can be stressful not only for the kids, but for the parents as well,” senior Reagan Broughton, who’s involved with Mu Alpha Theta, said. “But I realized the privileges I have and how lucky I am, so to be able to give something as small as a toy to a kid who needs it and would enjoy even the smallest of things is incredible. It just makes me so happy.”

Stewart, who has been involved with organizing the event for 10 years, said that the high school conducts fundraisers throughout the year for the project, and also thanked Cindy Chinn, from Big Sandy Superstore, for a large donation, as well as the River Cities United Way for providing a grant to purchase the clothes.