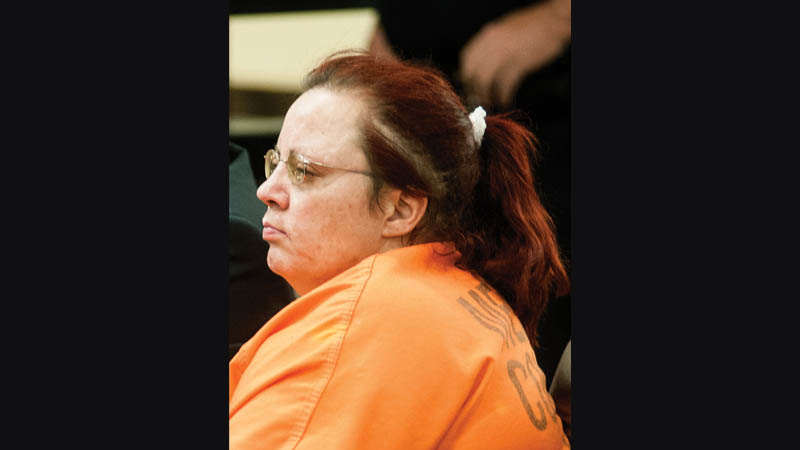 Tina Campbell-Adkins, of Chesapeake, is accused of murdering her husband and locking his body in a refrigerator back in the early spring.

A Chesapeake woman awaiting trial in a murder case had a mental evaluation filed and admitted into Lawrence County Common Pleas Judge Charles Cooper’s court as evidence on Wednesday.

Tina Campbell-Adkins, 43, of 603 Rockwood Ave., Chesapeake, is accused of killing her husband, David Adkins, and then putting his body in a refrigerator locked by a chain and padlock back in the early spring of this year.

Campbell-Adkins’ defense attorneys Mike Davenport and Jason Smith presented the evaluation on Wednesday, which was to determine whether or not Campbell-Adkins was a battered woman or not. The findings were inconclusive, but it was suggested that she might have mental issues.

Prosecuting attorney Mack Anderson said that another evaluation would need to be completed in order for her to plead not guilty by reason of insanity in the case, if she is in fact found to be incompetent. However, a motion to do so has not yet been filed by the defense.

Campbell-Adkins is facing an aggravated murder felony and tampering with evidence, a third-degree felony.

Trial was set for March 19, and will last a week.

• Keturah Adkins, age unknown, of 1028 Township Road 107, Scottown, rejected the state’s final offer of 10 years. She previously pleaded not guilty to four counts of burglary, all second-degree felonies, and theft of a motor vehicle, a felony of the fourth-degree. She is facing a total of 33 and a half years in prison if found guilty. Cooper set trial for Jan. 4.

• Phillip S. Morrison, 45, of 113 Columbus St., South Point, pleaded guilty to tampering with evidence, a third-degree felony, and possession of cocaine, a felony of the fifth-degree. In exchange for the guilty plea, a second-degree misdemeanor count of resisting arrest was nolled. Cooper set sentencing for Jan. 3.

• Isaac Hannon, 35, of 1530 S. Fifth St., Ironton, pleaded guilty to trafficking in heroin, a fourth-degree felony, and possession of heroin, a felony of the fifth-degree. Ballard sentenced him to three years in prison and ordered him to pay court costs. $217 was also forfeited in the case.

• Bernard Waller, 28, of 21690 Bennett St., Detroit, Michigan, pleaded guilty to trafficking in drugs (Oxycodone), a second-degree felony. Ballard continued his bond until sentencing, which was set for Jan. 24.

• David A. Webb, 30, of 2913 Hamilton St., Ironton, admitted CCS violations. Ballard sentenced him to 35 months in prison. In another pending case, Webb is facing an eight count indictment, which includes five counts of trafficking in drugs (methamphetamine), four fourth-degree felonies and one of the third-degree, two counts of assault on a peace officer, both felonies of the fourth-degree, and possession of drugs (methamphetamine), a fifth-degree felony.