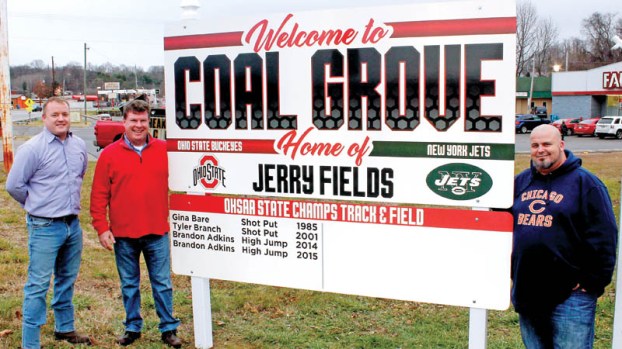 COAL GROVE — People driving into Coal Grove will now notice a new sign honoring Jerry Fields, an all-time great football player out of Dawson-Bryant and one of the best athletes ever produced by Lawrence County.

“When I got on Coal Grove village council four years ago, I discussed it with a few people and thought that Coal Grove should honor Jerry Fields,” Coal Grove Councilman Eric Holmes said.

“We put it on the backburner for a couple years, but now it’s the end of my term and I wanted to get this done before the end of the year.”

Fields graduated from Dawson-Bryant in 1956, racking up numerous awards, including being chosen as All-County in 1953, being a member of the first Ohio Valley Conference (OVC) championship team in 1954, being named All-OVC and All-Ohio in 1954 and 1955, and also being named a North/South All-Star Game selection in 1955.

From Dawson-Bryant, Fields went on to play for the Ohio State Buckeyes under legendary head coach Woody Hayes on a full scholarship. Although freshmen were ineligible to play varsity at the collegiate level at the time, Fields played quarterback, linebacker and was the punter for the Buckeyes the next three seasons.

In 1961, Fields was drafted by the New York Giants in the 13th round of the NFL draft before being cut by the team after suffering a knee injury. From there, Fields went on to sign a contract with the New York Titans, now the New York Jets, where he played for two seasons in 1961 and 1962.

In 1963, Fields signed a contract with the Montreal Allouettes, of the Canadian Football League, and was the team’s quarterback and a linebacker, playing in 13 of 14 games during the 1964 season.

“Jerry also worked in the Coal Grove community for many years after he retired,” Coal Grove Councilman Andy Holmes said. “And he still lives here in the village today.”

Underneath the sign recognizing Fields, another sign also recognizes all of the Dawson-Bryant track and field state championship winners, which include Gina Bare for shot put in 1985, Tyler Branch for shot put in 2007, and Brandon Adkins for high jump in 2014 and 2015.

The signs were a project of Coal Grove Councilmen Eric Holmes, Andy Holmes, Nick McKnight and Tom McKnight, and were approved at a recent village council meeting.

Other indictments returned to prosecutor A pair accused of murder or being involved with murder was recently indicted by a... read more