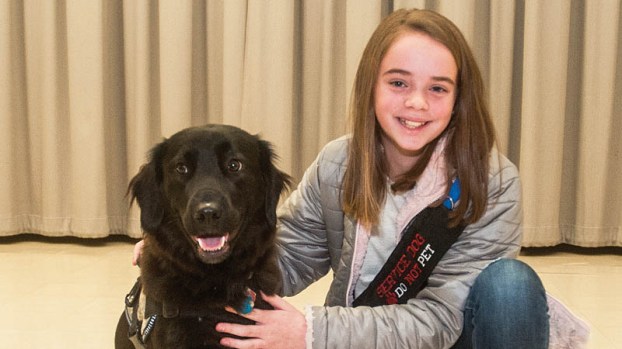 PROCTORVILLE — For the second straight year, the winner of the Lawrence County “Top Dog” essay contest was from Fairland West Elementary School, as fifth-grader Madison Rummel took the prize for writing about her dog, Liberty.

This year was the fifth year for the contest, which is sponsored by the Lawrence County Auditor’s Office.

“My dog Liberty is smart and has lots of personality. Liberty is my dad’s service dog. She helps my dad so he can go places with us,” Rummel’s essay read. “When Liberty is home, she’s our family pet. She doesn’t have to wear a vest and we can play with her.”

Rummel also expressed how Liberty goes to Cleveland every Friday with her father, Wayne Rummel, to learn special commands, which she uses when she’s out with Wayne.

“Sometimes I get to go to training with her, and they let me help with the service dogs,” her essay read. “That’s why my dog is the ‘Top Dog’ in Lawrence County.”

The students gathered in the school’s gymnasium for the presentation of the award, which became known as Lawrence County Auditor Jason Stephens read the winning essay. Madison’s parents were also there with Liberty to surprise Madison and the students.

Wayne Rummel, a veteran who served two terms overseas, also spoke to the students about the purposes of service dogs and some of the things that they can do.

“Liberty is training at Wags 4 Warriors,” Wayne Rummel said. “She’s learning commands, such as how to turn the lights on during nightmares and blocking to create space from people who may be very close to you or behind you.”

Liberty is a black Labrador-mix who will turn one year old on Jan. 22. The Rummels’ got her when she was six weeks and she began training at eight weeks.

Stephens said this year more than 80 essays were submitted for the contest by third, fourth and fifth graders in five districts, one of the best years of participation since it began.

“The purpose of this is to bring awareness to buying dog tags. The money goes toward the dog shelter, which tries to adopt homeless dogs and cats,” Stephens said. “And it’s a good way for the kids to talk about their dogs. Kids at this age are very honest, and they really love their pets. I think this is something they really enjoy.”

Besides Fairland West, other elementary schools who submitted entries into the contest included Rock Hill, Symmes Valley, Dawson-Bryant and Burlington.

For winning the contest, Rummel received a certificate and a trophy, while Liberty received the No. 1 dog tag for the year in the county.

The deadline to purchase dog tags from the county auditor’s office is Jan. 31. The cost is $12, and doubles if purchased after the deadline.