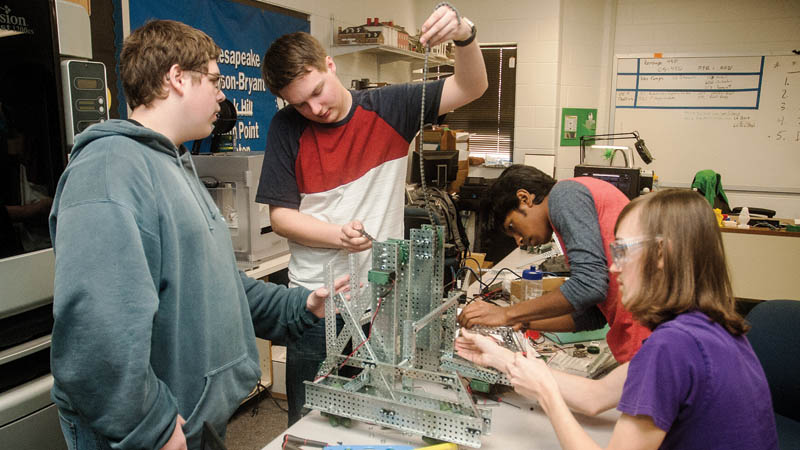 Lawrence County Project Lead The Way students competed in a robotics competition over the weekend at Marshall University.

“This is the third year of Lawrence County Project Lead The Way taking part in this robotics competition, and probably around the 10th year of the competition altogether,” Matt Monteville, CCTC satellite coordinator, said. “Collins Career Technical Center has supplied more than $50,000 in robotics parts, and each robot costs around $2,000-$3,000 each.”

He added that although Project Lead The Way teaches many things outside of the robotics competition, the project is something that is very useful for the students.

“With Project Lead The Way, we try to emphasize problem solving, teamwork, innovation and critical thinking,” he said. “While we teach a whole curriculum outside of this, this is just a wonderful opportunity to touch on each of those things.”

Each team, comprised of four to five students, designed and built a robot that is able to stack cones in a variety of ways as fast as it can.

The tournament began with teams being randomly grouped with each other to compete, before the results of those matches were used to create seeds for a single elimination bracket.

Monteville said all of the Lawrence County teams in the competition did very well, and he was pleased with the results.

“We had a successful day with teams from Chesapeake, South Point and Rock Hill competing in the semi finals,” he said. “South Point advanced to the championship round, but lost to an alliance comprised of Wayne Hush School, Lincoln County High School and South Charleston.”