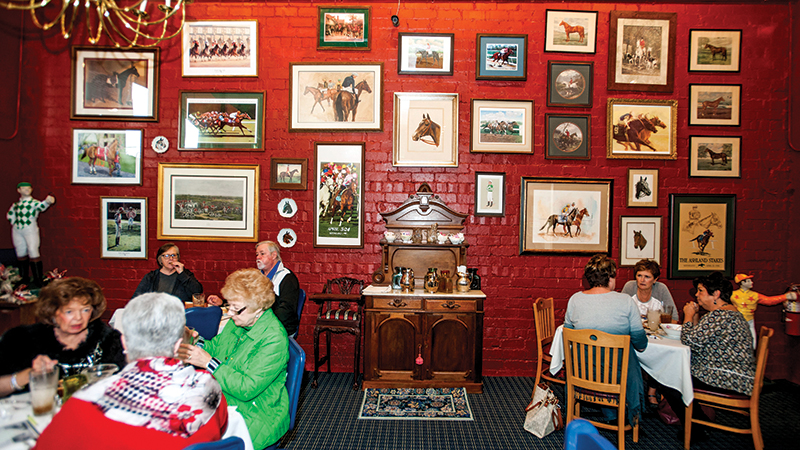 Corbie Stull, owner of Corbie department store and The Jockey Club, said putting a restaurant into the store was something that he always wanted to do since he opened around four years ago.

ASHLAND — Tucked into the side of Corbie department store in Ashland is a new dining experience in The Jockey Club, offering numerous sandwich options, homemade sides, soups, salads and desserts.

Corbie Stull, owner of Corbie department store and The Jockey Club, said putting a restaurant into the store was something that he always wanted to do since he opened around four years ago.

“When I bought the place about four years ago, we wanted to put a restaurant in here, but we faced a lot of state and federal regulations, so it took quite a while to finally do it,” he said. “But I wanted to make it an equestrian theme, being in Kentucky, and I’m a big collector of equestrian art and items.”

Stull said the space the restaurant is in used to be a loading dock, and the building is one that has a lot of character and quaintness to it.

“When I put this together, my friend Jason Hill, who’s an architect, helped me design it,” he said. “He’s done a lot of restaurants in the Columbus area, and he helped with all of the colors, paintings and decorating of the restaurant.”

The Jockey Club is known for its chicken salad, but has 10 different sandwich offerings on several types of bread, including beer bread, white or wheat, a croissant or a roll. There are also a plethora of salad options, including chef, cobb, Kentucky wedge, Caesar and more with homemade dressings, sides that include Red Jacket potato salad, southern pear and cheese salad, baked beans and cole slaw, and many different kinds of soups, such as creamy potato, chicken tortilla or state favorite, Kentucky Burgoo, made with a blend of beef, chicken and southern vegetables. To finish off your meal, several tasty desserts are offered on the menu as well.

“We make southern, homemade food. Nearly all of our food is homemade,” Stull said. “And we wanted to make our prices low for people who are downtown working, and want to get a meal without spending a lot of money. We also get a lot of repeat customers.”

The Jockey Club opened for business at Corbie on Sept. 13, 2017, and Stull said it has been very busy ever since.

“It’s been really good for the store as well,” Stull said. “People come in to shop, and then stop to eat. It’s been very successful.”

Stull added that he hopes to add more hot food items to the menu shortly after the first of the year, also adding occasional specials and trying new things each month.

The Jockey Club is open from 11 a.m.-6 p.m. Wednesday through Saturday, with a happy hour on Fridays, featuring drink specials and a free cocktail bar. α