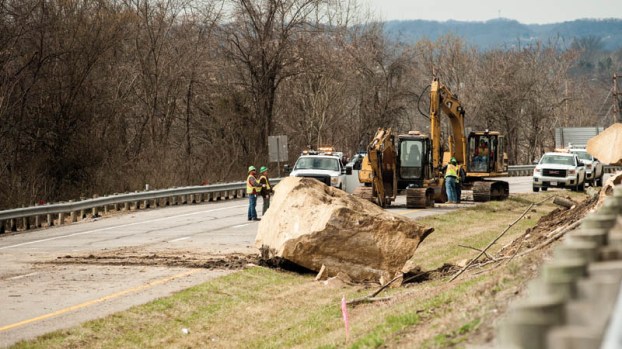 Crews are working around the clock to clear the rock from State Route 7 near U.S. 52 in Chesapeake following a rock slide early Monday morning. The highway is reopen to one lane in the eastbound direction.

Westbound lanes expected closed for up to three weeks

Crews are continuing to work around the clock clearing rock and debris from State Route 7 after a rock fall between the U.S. 52 interchange and State Route 527 at Chesapeake, but the route is now open to one lane in the eastbound (northbound) direction.

All four lanes of the highway were previously closed between County Road 15 (Buffalo Creek) and County Road 124 (Tallow Ridge Road) following a rockslide that occurred in the early morning hours Monday.

The Ohio Department of Transportation’s District 9 issued an emergency contract with DMG, Inc., who is working along ODOT’s Lawrence County Highway Maintenance Facility 24 hours a day in order to clear the rock. Once the rock is cleared, DMG will make pavement repairs and clear additional loose rock from the hillside before fully opening the route to traffic.

Until all work has been completed, State Route 7 will remain closed in the westbound direction. Although the duration of the closure is unknown at this time, ODOT anticipates that the closure and the single-lane restriction eastbound will be in effect for up to three weeks.

Rockslide closes U.S. 52 in both directions

CHESAPEAKE — Crews were working Monday afternoon to remove boulders from U.S. 52, following a rockslide early in the morning.... read more