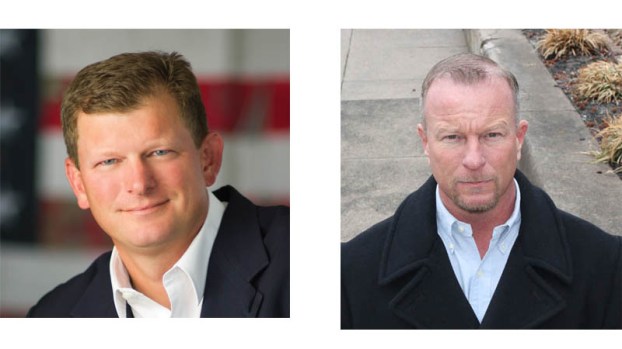 Republican and incumbent county auditor Jason Stephens and Democratic candidate Jason Tolliver will both be on the ballot after protests against each were withdrawn.

No hearing needed; both will be on ballot

After a lengthy Lawrence County Board of Elections meeting Monday evening, two protests against the auditor candidates were withdrawn on Tuesday.

Three total protests were previously filed with the board, two against Democratic candidate Jason Tolliver and one against Republican and incumbent auditor Jason Stephens, all regarding petition circulation irregularities.

The first, filed by Chesapeake attorney and Republican Richard Myers against Tolliver, was immediately voted invalid by the board on Monday due to state law requiring a protest be filed against a candidate of the same party as the protester for a primary race.

The other two protests, one filed by Democrat Amanda McCallister against Tolliver and the other filed by Republican Kaileb Legge against Stephens, were voted into a tie by the board with Democratic board members Craig Allen and JT Holt voting them invalid and Republican board members Randy Lambert and Carl Bowen Sr. voting for them being validated.

Holt said he believed the two remaining protests were invalid because neither contained credible witnesses to any of the accusations, and that McCallister’s protest was nearly identical to that of Myers.

“These protests are just rumors put on paper. No one with personal knowledge or who actually witnessed any of the allegations came forward,” Holt said. “No one came forward before the deadline. There’s a clear statutory deadline, and we have to respect that.”

He also added that he believed this was all just about politics.

“People are trying to use the board to play out political goals across party lines,” he said. “And I’m not going to be part of that.”

Bowen and Lambert said that they believed there was enough to the protests to make them valid enough for a hearing, also adding that just because one that was filed was identical to an invalid protest did not automatically make it invalid.

To further complicate matters, McCallister’s attorney, Casey Baker, was also the subject of some scrutiny due to him being affiliated with Myers’ law firm, Myers and Neville, LLC, causing a possible conflict of interest.

Although Baker said he withdrew himself from the firm Dec. 31, 2017, effective Jan. 1 of this year, he indicated that he is still in fact affiliated with the firm, working on certain cases as well as sometimes still using office space at the location and meeting clients there.

The board requested county prosecutor Brigham Anderson get an opinion from the disciplinary board of the Ohio Supreme Court regarding if there is a conflict of interest in Baker representing McCallister.

At the conclusion of the meeting Monday, with the tie vote on the validity of the two remaining protests, they were to be sent to the Secretary of State to determine if they were valid or not.

However, McCallister and Legge sent emails to the board on Tuesday morning notifying that they intend to withdraw their protests sometime that day or early Wednesday, signifying that there will be no hearing.

Stephens and Tolliver will both be on the primary ballot on May 8.

Council moves on police needs, fire department roof CHESAPEAKE — The issue of stray animals in the village was a... read more