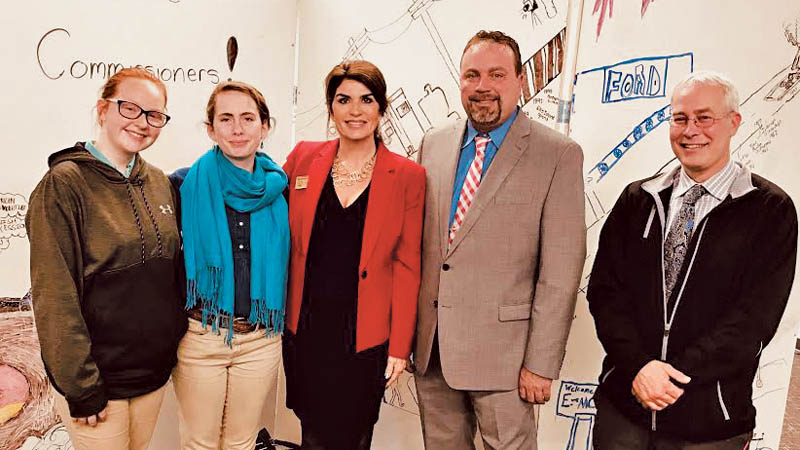 STEM+M Early College High School students, from left, Allison Himes and Anna Holmann, served as tour guides for commissioners DeAnna Holliday, Freddie Hayes Jr. and Bill Pratt during their visit to the campus on Tuesday. They are standing in front of the “living timeline,” a project from Semester 1, which displays inventions and historical events from the year 1500-2000.

At Tuesday’s commission meeting, which took place at the Tri-State STEM+M School, the commission agreed to join with Cabell County, West Virginia, the city of Barboursville, West Virginia and KYOVA Regional Interstate Planning Commission in funding the study, which is proposed to cost $250,000, county auditor Jason Stephens said.

“This is something that we’ve talked about for years and years and years,” Stephens said. “The two roads directly line up with each other across the Ohio River, and this could ultimately lead to an outer belt.”

Stephens said that KYOVA has come up with some money and the willingness to complete the feasibility study for the bridge, with Cabell County and Barboursville agreeing to pay $30,000 and Lawrence County paying $20,000.

The Lawrence County Engineer’s Office and the Lawrence County Port Authority each agreed to pay $5,000 with the commission agreeing to pay the remaining $10,000, which Stephens said was already set aside in the capital improvement fund.

“It’s exciting that the commissioners are able to take this opportunity in the future development of our road infrastructure. That’s very important to the progress of Lawrence County,” Commissioner DeAnna Holliday said. “I’ve been very involved with trying to recruit business to Lawrence County, and restaurant and retail chains, and even big business, are looking for good road infrastructure; interstate quality roads. And this particular study is a huge component for future funding for Lawrence County.”

Commissioner Freddie Hayes said he is also excited about the possibility of the bridge, adding that he lives only a few minutes away from it.

“I think this will be a plus, especially for the people in Athalia and Rome,” he said. “And it’ll also bring some more, different people into our county.”

Because the meeting took place at the Tri-State STEM+M School, Jayshree Shah, founding director of the school, talked a little about the school and what it’s about.

“We opened in August of 2017, and at this point we have 55 students,” she said. “What makes us special is that it’s a project-based curriculum that is trans-disciplinary, meaning that everything we do is connected.”

She also said that at the end of each semester, there is a design challenge, in which has a different topic every time.

“This semester is on healthy heart,” she said. “And the students have been doing things all semester related to the challenge.”

Last month, the STEM+M students hosted a healthy heart event for the community, and this Saturday, are conducting Paws for STEM, which is to teach that having pets is good for the heart.

• Approved a motion to clarify with OPERS that the employees’ retirement deductions are pre-tax and not post-tax.

• Met in executive session with Chris Kline and Sue Shultz regarding personnel; hire, fire, reprimand. No action was taken.

• Met in executive session with Gary Criswell, URS, and Chris Kline regarding personnel; hire, fire, reprimand. No action was taken.

The next Lawrence County Commission meeting will be 11 a.m. Thursday in the commission chambers on the third floor of the courthouse.