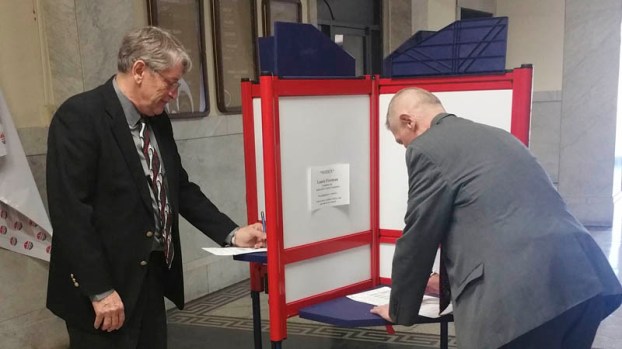 Early in-office voting began Tuesday and Lawrence County Board of Election Chairman Craig Allen and board member Randall Lambert were the first two people to in Lawrence County to cast an absentee ballot.

Absentee voting in Ohio began on Tuesday morning for the May 8 primary.

And as is tradition in Lawrence County, two members of the Board of Elections were the first ones to cast absentee ballots to kick off the beginning of in-office voting.

Lawrence County Board of Elections Chairman Craig Allen and board member Randall Lambert were at the office at 8 a.m. to cast their votes.

Toni Trosper, the deputy director of the Lawrence County Board of Elections, said that has been a tradition for a decade or longer.

“It is something they have done for at least 11 years, if not longer,” she said.

The board of elections is mailing out absentee ballots as requested.

“We don’t do mass mailings, the state does sometimes,” Trosper said, adding that the county does as requested. “We’ve had about 20 or 30 requests so far.”

Mailings go out in the order the request is received.

“So the sooner people get their absentee applications in, the sooner they will get their ballots,” Trosper said.

“But this is pretty low for even a primary,” Trosper said.

The last day they will mail out an absentee ballot is May 5.

“We have to receive the request by mail that day and we have to have it by noon,” she explained. By state law, ballots must have a postmark of May 7 to be valid.

Absentee ballots are not counted until Election Day.

“They are stored here in the office in a vault,” Trosper said. “There are two locks, I have one and (Director) Cathy (Snider) has one. One is a combination and one is a key.”

The office’s web site is electionsonthe.net/oh/Lawrence, which contains election information.