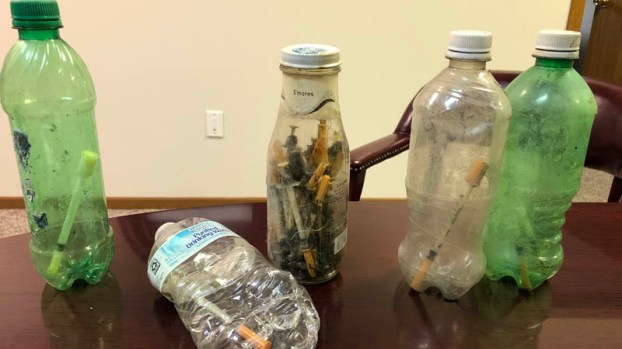 Pictured are some syringes found along U.S. 52 between Hanging Rock and Coal Gove. Crews from the Lawrence-Scioto Solid Waste Management District and the Ironton Municipal Court community service program were collecting trash and litter two weeks ago.

Those driving on U.S. 52 between County Road 1A near Hanging Rock and the ramp above the highway in Coal Grove may have noticed that the roadway was cleaner, thanks to efforts by Lawrence County Prosecutor Brigham Anderson, the Lawrence-Scioto Solid Waste Management District and the Ironton Municipal Court community service program.

“Prosecutor Brigham Anderson contacted us to tell us that U.S. 52 was in bad condition as far as litter and things like that, and wanted to see if we would be able to do anything,” Palmer said. “Usually we only handle county and township roads, but the condition of U.S. 52 was embarrassing for our county and for people driving through there to see that kind of stuff.”

The cleanup efforts took place around two weeks ago, and took a week to complete.

“I first contacted Mark Gleichauf, the ODOT (Ohio Department of Transportation) director for Ironton,” Palmer said. “He told me they would not be able to help due to the lack of manpower, so from there I contacted Vince Sheridan, head of the community service program for Ironton Municipal Judge Kevin Waldo, and they were able to help us out in the cleanup.”

Palmer said that throughout the week, 330 total bags of trash were collected from the highway, as well as between 50-75 syringes, around 22 tires, and other large items, such as pieces of fenders or other vehicle parts.

“We collected 32 needles in one area at one point,” he said. “The total amount of needles we collected was atrocious, but we’re glad to be able to get them off the street.”

The Ironton Health Department also offers a free disposal service for people who use syringes to inject medication.

May slow flow of heroin, fentanyl into Ironton A huge drug bust in Huntington, West Virginia could have a positive... read more