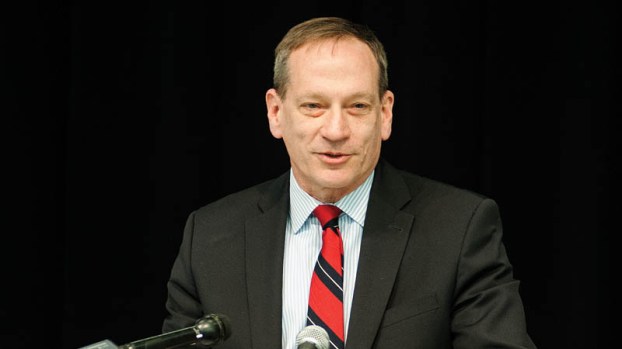 Lawrence County Municipal Court Judge Donald Capper, who is running for the seat of Lawrence County Common Pleas Judge Charles Cooper in the fall, recently received an endorsement from the Fraternal Order of Police Lodge 75.

“Judge Capper came down around two weeks ago and talked to us for about an hour and a half,” Ironton Police Detective Joe Ross, who is also the president of the local police lodge, said. “He asked us for an endorsement, and when we talked about it, he had the support of the majority of the lodge, so we decided that we would endorse him.”

Ross added that the police lodge does not often endorse political candidates, but that the support for Capper was overwhelming.

“We’re very satisfied with his work ethic, his honesty, and we believe he has the total package of what you would need to bring to the common pleas judge’s seat,” Ross said.

“With the importance of this race and his experience, especially with the drug epidemic going on, we believe Judge Capper is the right choice. Everyone’s excited about it.”

Capper, a Democrat who has been the Lawrence County Municipal Judge for 26 years after originally being appointed to the position, said he believes he is the best choice for the common pleas judge and that he is very happy with the police endorsement.

Capper also added that he has knowledge and experience from all aspects of the court, stating that before he worked for the county prosecutor’s office, he was a defense attorney.

“I’m very neutral to both sides,” he said. “I was a defense attorney before I was with the prosecutor’s office, so I’ve had experience in every seat in the courtroom.”

“I definitely want to continue the drug court that Judge Ballard has initiated. I work very well with him, and I think that’s a great thing. I also want to merge all of the adult probation departments to make the court system more efficient,” he said. “Currently, there is a lot of overlap with that and oftentimes people have cases in more than one court. It would make sharing resources and information a lot easier, and would be more effective. I would also like to see us be able to be more digital in the common pleas court, and make pleadings and more information on cases more easily accessible on the Internet. Not a lot of state courts are doing that, but all federal courts are already digital.”