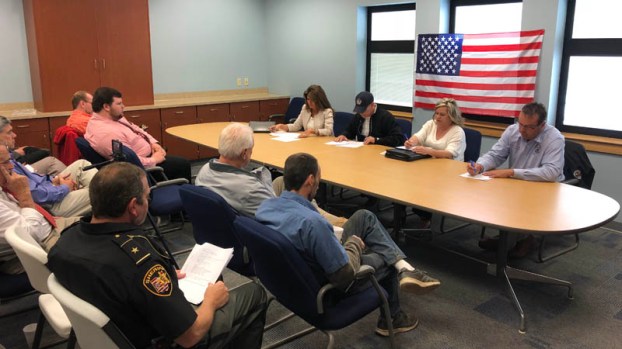 The Lawrence County Commission had its meeting Tuesday at the Union Rome Sewer facility in Chesapeake.

CHESAPEAKE — The Lawrence County Commission accepted a letter from Ironton business owner Joe Unger at its meeting Tuesday regarding the upcoming renovations to the county courthouse. The meeting took place at the Union Rome Sewer facility in Chesapeake.

“I read with interest in The Ironton Tribune concerning restoration and renovation of our historic Lawrence County Courthouse in downtown Ironton. It was so refreshing to see the commissioners take the initiative in maintaining this beautiful structure and to not dodge the responsibility of spending money on upkeep, repairs and historical integrity,” Unger’s letter states. “I think there are plenty of counties out there who would love to have a copper-domed courthouse as beautiful as ours. I also wish to applaud your wisdom in keeping the courthouse’s landmark architecture in mind, especially when I think of the tragic irresponsibility of ‘kicking the can down the road,’that led to the downfall of Memorial Hall on Railroad Street.”

All of the work will be completed by The Perfection Group, based out of Cincinnati, and will include updating the current manual temperature controls, inefficient lighting, the failing rubber roof of the old courthouse building, aged and freezing coils, hazardous concrete walkways, masonry in need of repair and more. The elevator in the annex part of the building would also be replaced, as well as the radiant heating system and sections of the EPDM roof.

As part of the project, new, energy-efficient lighting would be put in inside and out, a new ventilation system with updated controls would be installed, the dome on the top of the building would be restored to its original copper color, among a plethora of other updates.

The money for the project is set to come out of the one-time $4 million in funds from the state, which was given to counteract the loss of the Medicaid Managed Care Organization (MCO) sales tax.

The commissioners all said that they were thankful to Unger for writing the letter, and also believed that taking care of the courthouse is extremely important.

Lawless said the county jail complied with 80 of the 115 standards, leaving 35 out of compliance.

“Overall, it was a pretty good report,” Lawless said. “The issues with the square footing and overcrowding are things that we can’t do anything about right now, but some of those things will get cleared up.”

• Approved and signed the contract for Lawrence County Juvenile Center residential services for Fayette County offenders at a rate of $85 per day per bed approved as to form.

May 1 event open to grads, community Ohio University Southern will have a Career Expo and Grad Fair on Tuesday.... read more