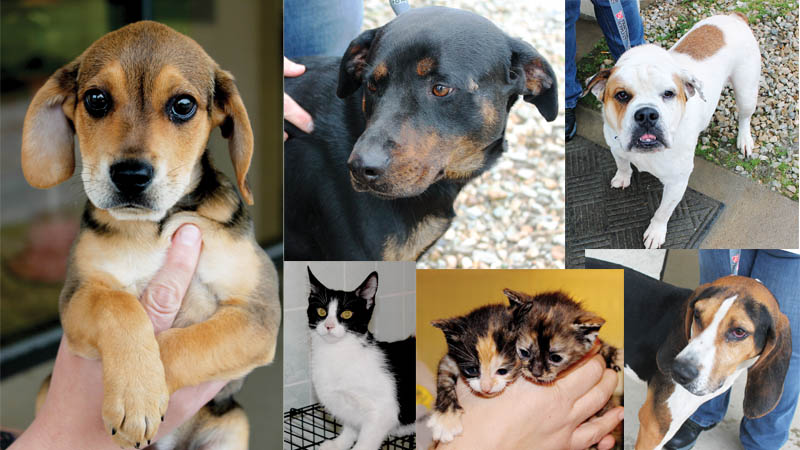 Several dogs and cats are available for adoption at the Lawrence County Dog Shelter.

Dogs, cats up for adoption at county shelter

The Lawrence County Dog Shelter has several dogs and a few cats currently up for adoption.

Some of the dogs up for adoption include a one-year-old Treeing Walker Coonhound, a three or four-year old English bulldog mix and a one-and-a-half year old Rottweiler mix. An eight-week-old Beagle mix puppy was just adopted Tuesday afternoon, however, Lawrence County Deputy Dog Warden Melissa Nicely said the shelter gets puppies quite often.

A few cats are also available for adoption in the shelter’s “cat shack,” as well as a few kittens being taken care of who are still too young for adoption.

“Cats have really been getting adopted recently, and more rescue groups have begun taking on cats and kittens, and the Lawrence County Humane Society and One by One Animal Advocates, a local group, have been working more with cats this year as well too, which has helped,” Nicely said. “It does vary though between people adopting more cats and people adopting more dogs.”

Nicely also said that the shelter’s “cat shack” has been recently remodeled, with new vinyl floors donated by Guy’s Floor Covering and shower board for the walls, purchased at a good rate from the Grandview Outlet in South Point, making it easier to clean.

The Lawrence County Dog Shelter remains a no-kill shelter by working with more than 50 rescue operations throughout the United States and Canada.

“The rescues that we work with pick which animals they would want from photos that I take and post where they can see them,” Nicely said. “Working with rescues is also a really good thing because it guarantees the animals will get spayed and neutered, which  helps with the population.”

“Right now, we really need some leashes and collars for medium to large dogs,” she said. “But we always accept any donation, and they do help.”

Anyone interested in adopting an animal from the Lawrence County Dog Shelter can do so for $30 per dog and $15 per cat. Dog tags are also an additional $12 if you live in Lawrence County.

The shelter is located at 1302 Adams Lane in Ironton.