OPIOID CRISIS: Opioids can be natural or man-made substances 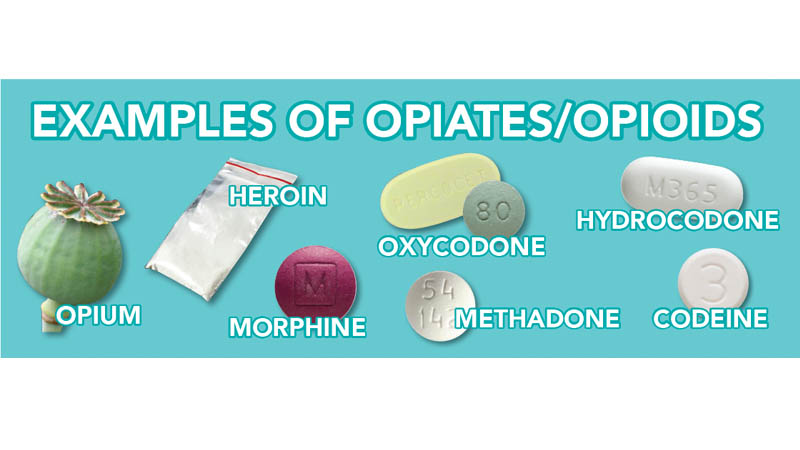 With the continuing drug epidemic in our region, and throughout the country, specifically dealing with opioids, it is important to understand the different types of opioids, how they affect the body when taken and which drugs are considered to be opioids.

Although the difference between opioids and opiates is minimal, all opiates are considered to be opioids, but not all opioids are opiates.

Opiates are drugs naturally delivered from the flowering poppy plant, while opioids refer to any substance, either natural or man made, that binds to the brain’s opioid receptors, or the parts of the brain that are responsible for controlling pain, reward and addictive behaviors.

Some of the most common examples of opiates include:

• Opium: Made from the white liquid found in the poppy plant, opium has a dark black or brown tar-like appearance and is commonly ingested by smoking. According to the Foundation for a Drug Free World, more than 13 million people use opium worldwide, and it remains one of the most expensive opiates in the world.

• Heroin: Processed from morphine, heroin remains one of the most dangerous drugs in the world responsible for countless deaths. The drug can be snorted, smoked or injected, which is the most common way of taking heroin. Injection is also the most dangerous due to individuals often sharing dirty needles, resulting in a high risk of contracting HIV/AIDS or Hepatitis. Heroin remains illegal in the United States.

• Codeine: Although codeine has a reputation of being the safest of all opioid analgesics, that way of thinking is often misleading because the drug makes individuals physically dependent following extended and repeated use. The drug is most often used medically in suppressing chronic cough, with nearly all prescription cough syrups in the United States containing codeine.

• Morphine: Morphine is the most active substance found in opium. The drug is an extremely powerful painkiller and very addictive. Although the drug is prescribed by doctors in treating serious pain cases, morphine is often used illegally throughout the country by those looking for its effects on their bodies.

Some of the most common examples of opioids include:

• Oxycodone: Commonly known by its brand name, “OxyCotin,” it is a prescription painkiller designed to take orally for a time-release fashion to distribute the active ingredients throughout the body over a period of time. Most problems come about when individuals snort or inject the drug, allowing all of the active ingredients to be ingested at once and putting them at risk for overdose and/or illness.

• Hydrocodone: Hydrocodone is a prescription painkiller also known by its brand names “Vicodin,” “Lorcet,” and “Lortab.” While the drug is highly addictive, not all those with a prescription will develop an addiction, but many people end up becoming physically dependent on the drug. While doctors prescribe it to treat pain, Hydrocodone has become a widely popular street drug.

• Methadone: While Methadone may not share the exact same qualities as heroin or morphine, abuse of the drug oftentimes leads to the same result. The drug is used to treat a narcotic addiction, though many people become addicted for the way it makes them feel.

• Fentanyl: A prescription medication created for patients suffering from severe, crippling pain, fentanyl was originally intended only to be administered by doctors. However, the drug eventually became available as an over-the-counter prescription medication commonly sold as a lollipop, lozenge or a time-released gel patch. Its potency is believed to be 100 times greater than morphine and taking too much can lead to death. The drug was originally intended only for patients who had built up a tolerance to already prescribed opiates, but are still experiencing pain.