County business of the month named 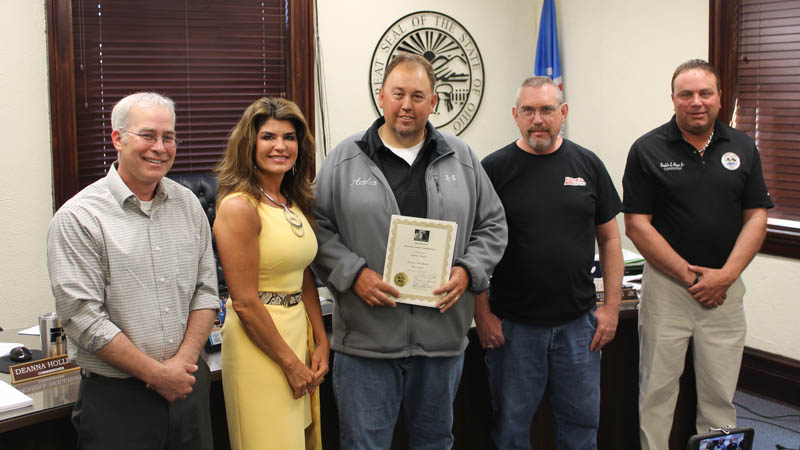 Malone’s Marine and Repair opened in 2011

The Lawrence County Commission awarded the county’s business of the month for May to Malone’s Marine and Repair at its meeting on Tuesday.

Located at 1201 S. Third St. in Ironton, Malone’s Marine and Repair opened for business in 2011 and sells Legend, Phoenix and Bullet bass boats, and Avalon Pontoon boats, along with Mercury motors.

“Malone Marine is the only boat dealership in Lawrence County,” commissioner DeAnna Holliday said. “And it’s nice to know that they are a premier boat dealership as well.”

In addition to the award by the commissioners, Malone’s Marine and Repair was also a recipient of a 2017 Mercury Marine CSI award for customer service.

“Only six in Ohio and only 205 in the nation were recognized with this honor,” Holliday said. “The business has four employees with combined experience of over 70 years. That really shows with the customer service.”

Chris Malone, owner of the business, said he was very appreciative of the honor from the commission, and said it is all about his employees.

“You’re only as good as your employees, that’s a big thing with me,” Malone said. “We’ve had great employees since day one, and we’re very appreciative of the award.”

Along with owning the business, Malone is also involved with the Lawrence County Bass Club.

• Approved and signed the Application for Funding from the Ohio Airport Grant Program. The grant total is $249,707, which includes the continuing of tree removal on private property.

• Approved a resolution for the Lawrence County Drug and Major Crimes Task Force, finding that the vehicles which are not needed for public use and valued less than $2,500 be sold by private sale, without advertisement or public notice, pursuant to the ORC 307.12 B-1.

• Approved a resolution authorizing the Lawrence County engineer to participate in the Ohio Department of Transportation’s winter contract for road salt.

• Received and filed the Project-Specific Release of Environmental Conditions for B-F-17-BN-1 for Economic Development and Ironton downtown facilities in the amount of $120,000, as requested by the Ironton-Lawrence County Community Action Organization (CAO).

• Approved the status change of John Higgins and John Music from part-time paramedic to full-time paramedic, both effective April 29, 2018.