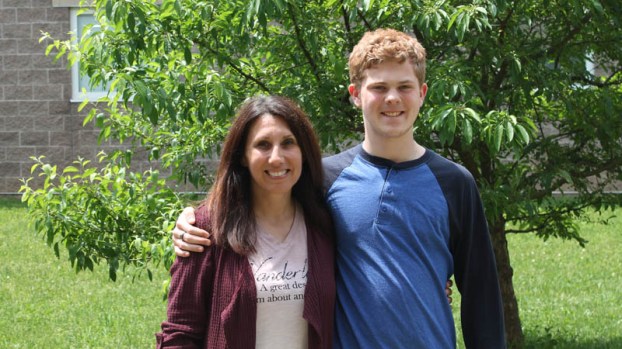 Ironton Middle School eighth grader Johnathan Miller, who has autism, was recently selected as a recipient for the R.A. Horn Award, which is presented to one exemplary student with a disability from each of Ohio’s 16 State Support Team regions.

Established 25 years ago by the Ohio Department of Education in honor of the late Dr. Raymond A. Horn, Assistant Superintendent of Public Instruction Emeritus, the award recognizes students’ remarkable performance and perseverance within the school and community setting.

“I’m just very happy and proud of myself,” Miller said of receiving the honor.

Miller moved to Ironton and enrolled in the school district when he was in the sixth grade.

“Johnathan Miller is a very special 14-year-old student at Ironton Middle School. He has autism, is a snazzy dresser and is one of the most well-known and well-liked students, not only in the middle school, but also among the students at the high school level. This is mainly due to his deep care and concern for fellow classmates,” Amy Perry, Miller’s intervention specialist at IMS, wrote. “Johnathan enrolled in the Ironton district during his sixth grade year. Upon his arrival and review of initial assessments, as well as based on previous reports and evaluations, Johnathan was set to have his curriculum provided through the Ohio Extended Standards. Through the efforts of his teachers, intervention specialists, and most importantly, through Johnathan’s strong desire to learn and do well, he is working his way off the Extended Standards and into the regular curriculum.”

Perry said that she is very proud of Miller for everything he has worked hard for to accomplish, and added that she and the school “really enjoys having him around.”

“Johnathan is one of the students that you just don’t know how much they know,” Perry said. “He works really hard and surprises everyone because he’s capable of doing so much more than people probably would expect. Everything we give him he succeeds at and continues to do more and more.”

Dr. Horn, who the award is named after, is acknowledged as the national leader in the field of special education and devoted more than 60 years of service to improving the quality of life and learning for students with disabilities. He left behind a legacy and a challenge to ensure that every student with a disability be given respect and the opportunities to which they are entitled.

Miller said he enjoys listening to music and participating in the county’s Special Olympics, where he was crowned the Special Olympic Spelling Bee champion in 2016.

Miller was the winner from Region 15, and will have the opportunity to be recognized with the other R.A. Horn Award winners at a luncheon in Columbus on Tuesday, June 12.

Hep A found at another Boyd County restaurant

ASHALND, KY. — The Ashland-Boyd County Health Department is investigating another case of a food service worker with hepatitis A.... read more