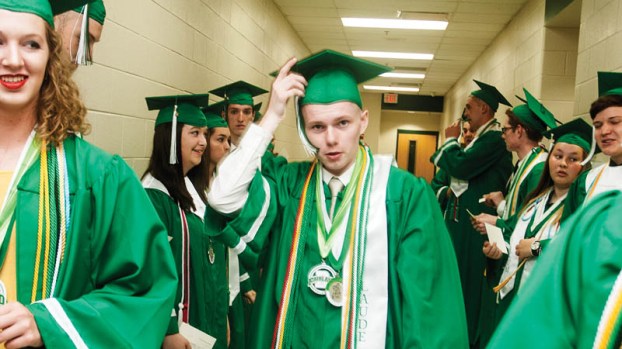 ROME TOWNSHIP — Seniors from Fairland closed out their high school chapters this past Friday, as the Class of 2018 received their diplomas at the school’s 69th commencement ceremony.

“We had 120 graduates,” principal Tessa Leep said. “And this year’s class has earned nearly $1.4 million in free college credits or scholarships.”

Graduate Marikate Polcyn said she is ready move on, but that she will miss things about being at Fairland.

“I’m going to miss all of my friends and my teachers,” she said. “They really helped me succeed.”

Polcyn was very involved at the school, and said she played volleyball, was on yearbook, the prom committee and in the Beta and math clubs.

“I’ll be going to Bowling Green State University in the fall to study marketing and business analytics,” she said. “I’m excited about meeting new people and exploring new places.”

Another graduate who was in the Beta and math clubs was valedictorian Brennen Criswell, who said he also played soccer while at Fairland.

“I really enjoyed all of my teachers here,” he said. “Next year, I’ll be going to Marshall  University to major in bio pre-med.”

Graduate Keedrick Cunningham, who is one of the more decorated graduates from the school athletically, said one thing he will miss about being at Fairland is the community support.

“Everything we do, a ton of people come out and support us for sports and other things,” he said. “The community really did buy in.”

Cunningham played football and basketball for the Dragons, and said one thing he will always remember is making it to the state Final Four in basketball his junior season. In addition, he also currently holds the school’s football rushing record.

“I committed to West Virginia State to play football,” he said. “And I’ll be studying medical health science.”

Leep, who just completed her second year as principal after previously serving as assistant principal, said that there were also five Fairland graduates who were enlisting in the military.