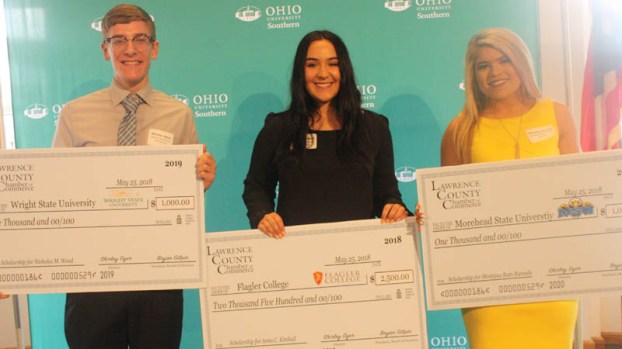 The three Lawrence County Chamber of Commerce scholarship winners were recently announced at the chamber’s Fourth Friday Luncheon on May 25.

Coming in first place was Anna Kimball, of Chesapeake High School, who received $2,500.

There were two winners for second place, Montana Runnels, of Fairland High School, and Nicholas Wood, of South Point High School, who were each awarded $1,000.

“We were so ecstatic to be able to commit to another year of funding these scholarships,” Shirley Dyer, director of the chamber, said. “Our scholarship committee put an abundance amount of their time into this process; a process in which no names were attached to any of the applications our committee saw, to ensure absolute fairness. It was just so difficult in narrowing down scholarship winners, as very candidate wrote such compelling stories that showed just how much they cared about their community.”

Applicants were requested to fill out applications, which mainly focused on writing about their future goals, and how the chamber’s scholarship would help support the building of their futures. The funds for the scholarships came largely from proceeds from the Festival of Trees and Christmas Market last year.

There were 48 total applicants for chamber scholarships from 10 high schools in Lawrence County.