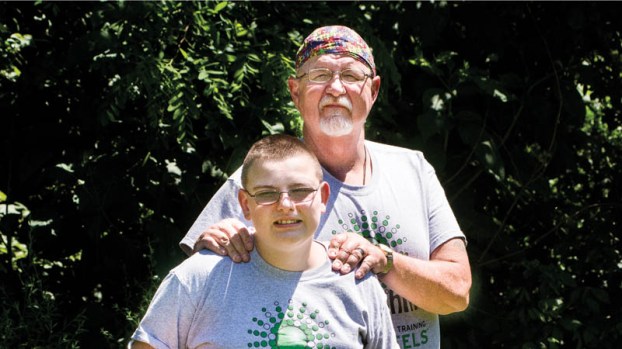 Bill Jordan and his son, Allen Jordan, of Coal Grove.

Bill Jordan’s son, Allen, has autism, and he said he wouldn’t like to have it any other way.

“I love being a father to a child with autism because it’s a new adventure everyday,” he said.

“They’re always needing you for something, and it breaks my heart how people sometimes look at children with special needs. But it’s great to be a father to a child with autism.”

Jordan, along with his wife, are involved with the Autism Project of Lawrence County, a group of about eight families who spread autism awareness and work toward educating others about the disability.

Something Jordan has also been doing for three years in April for Autism Awareness Month is a ride around Lawrence County, either on a mini bike, a side-by-side or a trike, which he is currently building out of a 4-wheeler and a motorcycle for his 2019 ride.

“I enjoy being around the children. They need a lot of people to look up to who understand autism,” he said. “It’s just a wonderful feeling having the children there and them looking up and saying how happy they are that you’re doing this for me.”

Allen Jordan, 11, attends Rock Hill Elementary and is getting ready to enter the fifth grade in the fall. Jordan says his son loves video games, riding bikes, animals and singing.

The Autism Project of Lawrence County has been around for about six years, and the Jordans have been a part of the group for the past three.

The group’s biggest fundraiser is also coming up on Saturday, June 30, where American Legion Post 433 in Ironton will sponsor a motorcycle ride. In addition, the group also conducts occasional bucket drives on the roads for people to donate money.

The Autism Project of Lawrence County, a branch of the Autism Project of Southern Ohio, meets at 6 p.m. on the first Monday of the month. Membership is $10 for a single person or $15 for a family per year, which runs from January through December. Anyone who wants to donate their time to the project will not have to pay a membership fee.

Any donations to the group are also tax deductible as allowed under IRS law.