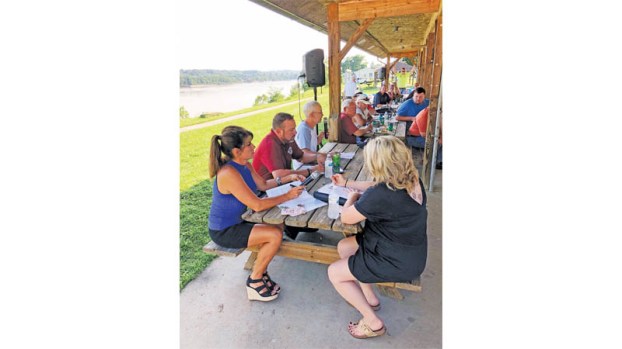 The Lawrence County Commissioners held their meeting Thursday at the Burlington Commons Park as part of their “out in the county” initiative.

Capper speaks about progress in courts

BURLINGTON— The Lawrence County Commission took its meeting “out in the county” on Thursday, as a meeting took place at the Burlington Commons Park.

The Concerned Citizens of Burlington, numerous community members, several county officeholders and department heads, candidates for various positions, as well as a few township trustees turned out for the event, which began with a cookout under the park’s pavilion.

He said all of the probation departments are now under a cloud-based program called CasePro, which allows information for defendants to be accessed by all of the courts, making it easier to share information if someone happens to be involved with more than one.

In addition, Capper said that with the ongoing drug addiction crisis plaguing our region, the number of service providers being offered for those addicted continues to grow, adding that from Jan. 1 through the beginning of June, 91 people have been sent to treatment programs just from his court alone.

“I’m going to estimate a final total will be in excess of 150 by the end of the year,” he said.

Lawrence County Treasurer Stephen Burcham also gave an update at the meeting, and said that the sales tax from June was down about $30,500 from June last year, but added that it was up from May.

He also said that with the decision from the South Dakota vs. Mayfair case at the Supreme Court, allowing all Internet purchases to be sales taxed, the county should see a benefit from that.

Second half tax collections are currently around $6.8 million, which is up from the same time last year, which was $3.9 million. Burcham said that 70-75 percent of tax collections go to the public schools in the county, and that “it speaks a lot about the citizens of this county to take care of our children.”

The second half tax deadline is Friday, July 6.

The commission also recognized county senior citizen Opal Cecil, 93, who recently gave up baking bread for the senior dinners after doing so for many years.

The commissioners proclaimed Friday, June 29, 2018, as Opal Cecil Day in Lawrence County, and presented her with a certificate at the Fourth Friday Senior Luncheon Friday at Proctorville First Baptist Church.

• Approved the appointment of David Greene to the Planning Commission term from July 1, 2018 through June 30, 2019.

• Received and filed the Notice of Public Hearing regarding the Pollution Control Standards, as requested by Lisa Pine, Union Rome Sewer (URS) Administrator.

• Approved and signed the Subgrant Award Agreement for the Drug and Major Crimes Task Force in the amount of $121,460.27, as requested by the Lawrence County Prosecutor’s Office.

• Approved and signed the Monitoring Response regarding the BF-14-1BN-1 new Labor Standards monitors, as requested by Cindy Anderson.

• Approved and signed the Resolution authorizing the Lawrence County Auditor to begin distributing the PILT funds accordingly, beginning with the June 2018 PILT payment.

• Approved and signed the Resolution authorizing the use of $2,591,317 from Medicaid Local Sales Tax Transitional Funds replacement funds for the renovation/restoration project of the Lawrence County Courthouse.

• Received and filed the monthly report from the Lawrence County Department of Job and Family Services.

• Met in executive session with Lawrence County Chief Deputy Auditor Chris Kline and Lisa Pine, URS, regarding personnel; hire, fire, reprimand. A new position of systems auditor was created for URS, as mandated by the EPA. Someone is lined up for the position, but salary and other job details are to be determined.

• Met in executive session with Kline regarding real estate. No action was taken.