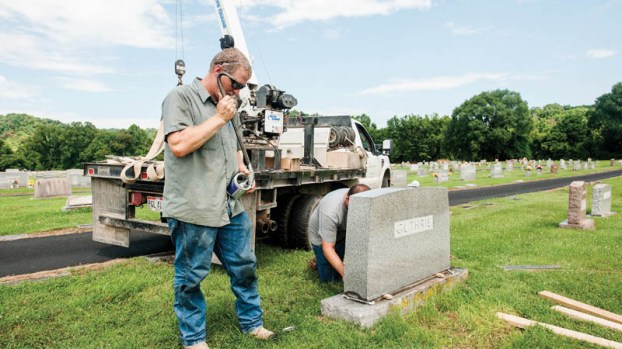 PROCTORVILLE — Numerous headstones were knocked over, and other damage was caused, late last week at the Rome-Proctorville Cemetery.

“We think they came in after dark Thursday night, around 9:30, and started vandalizing,” Ron Jenkins, cemetery caretaker, said. “From what I saw, they started in the garden area, tearing up and destroying all of the flood lights, and then they went straight out from there grabbing people’s flowers and vases, throwing them everywhere, and then began knocking down headstones throughout the cemetery.”

He added that, when he first saw one headstone knocked over, he thought it could be from a driver, but said when he began seeing a variety knocked down, he knew it was people “on foot” causing the damage.

“It probably took them a few hours to cause all of this damage, and it was probably three, maybe four, people,” he said. “I noticed it on Friday morning. I always open up the main gate and check the perimeter.”

Jenkins said he notified the Lawrence County Sheriff’s Office, who is conducting an ongoing investigation and viewing security cameras at the cemetery and the area.

“They want us to get estimates of the damages to determine what types of charges to charge with when they find out who’s at fault,” he said. “There were probably around 26 headstones that were down.”

Jenkins has been the cemetery’s caretaker since 2011.

Crews from Lawson Monument Company in Huntington, West Virginia, were repairing some of the damaged headstones on Monday. However, the old part of the cemetery, where several others were damaged, is maintained by a separate fund.