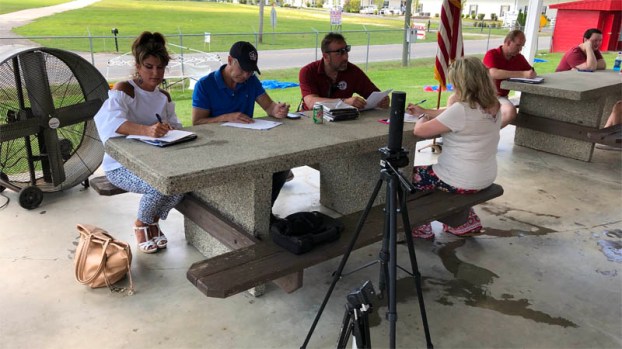 The Lawrence County Commission conducted its meeting Tuesday at the county fairgrounds.

The board is only for areas of Lawrence County that do not have access to running water, and a hearing on the matter was conducted at the Lawrence County Common Pleas Court last week.

Those appointed to the board include Lindsey Pemberton, Kelly Brock, Cole Webb, Dave Lucas, and Freddie Hayes Jr. as the representative from the commission.

Pemberton, Lucas and Webb will serve on a two-year term, while Hayes and Brock will serve a one year-term. Further details of the board, including pay, are still to be determined.

Members of the Roman Harbour Home Owner’s Association were also in attendance regarding a corrugated metal drainage pipe that has caused flooding to the entrance and areas of the subdivision.

At a previous commission meeting, the association brought attention to the issue, and the commission made a request for legal opinion from the prosecutor’s office, which was received and filed on Tuesday.

“By letter dated June 28, 2018, you have requested an opinion from this office regarding a corrugated metal pipe that extends from the ditch at County Road 107 to the river and runs through Roman Harbour subdivision. It is our understanding that from your research, you can find no easement granted to the state or county regarding this drainage pipe. If no easement was granted to the state or the county as successor of the state as to County Road 107 for this drainage pipe, it would be our opinion that the county would have no obligation, or in fact, no right to deal with the drainage pipe,” the letter from the county prosecutor’s office states.

“We would further agree with your assessment that even though the drainage pipe has been there for a period in excess of 26 years, would not mean that the county has acquired a prescriptive easement. To do so, the county would have had to take legal action to acquire such a prescriptive easement, which apparently has never been undertaken. In conclusion, since the pipe is on private property to which the county does not have an easement over, the county can not maintain or deal with the drainage pipe.”

Members of the association stated that they would have the right to cap the drainpipe, however, in doing so would cause flooding to the main road and surrounding area.

The commission asked the association to request their own legal opinion to bring to the next meeting, and the issue will go from there.

The commission also recognized Margaret “Babe” Jones, of Proctorville, who will be celebrating her 100th birthday on Friday, July 13. A certificate from the commission was going to be presented to her on Friday.

• Approved and signed the Contract for Community Residential Services for Adams County Juvenile Center at $85.00 per bed, which was approved by Mack Anderson, Lawrence County assistant prosecutor.

ROME TOWNSHIP — Pies, cakes, cookies and more were up for bids on Monday in the Sweet Tooth Auction at... read more