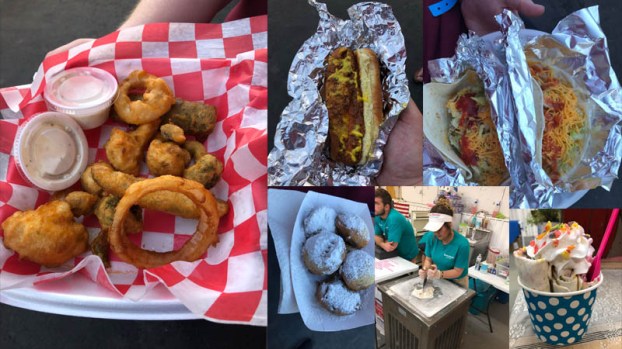 The Lawrence County Fair has numerous food options to try.

ROME TOWNSHIP — Every fair offers a plethora of cuisine that you can only get in the setting. The 2018 Lawrence County Fair is no different, and did not disappoint with its variety of offerings.

Here are some of the things that I tried at the county fair Tuesday evening.

• Deep-fried veggies: Although not the healthiest way to consume vegetables, the fried veggies at the Lawrence County Fair were delicious. The dish was served with pickles, onions, broccoli, cauliflower and mushrooms, and came with ranch dipping sauce.

• Chili and mustard dog: The hot dog I got was from the Side Line Grill food truck, and although it may not have looked the most appetizing, it definitely satisfied with its tasty chili sauce and mustard to complement.

• Soft tacos: I got two soft tacos from Crazy Rod’s Mexican Canteen, which featured seasoned ground beef, lettuce, cheese and tomatoes. Although I opted for no tomatoes (not a big fan), the tacos were big on taste with seasoned beef that was not overpoweringly spicy, but still held a kick. I used mild sauce on one, which was good, and hot sauce on the other, which gave the taco some nice added spice.

• Deep-fried Oreos: An order of six deep-fried Oreos will satisfy any sweet tooth. The cookies on the inside become soft, which balances perfectly with its sweet and slightly crunchy shell. Powdered sugar to top them off, and you have yourself a very sweet treat.

• Fruity Pebbles rolled ice cream treat: Kustom Kreams, of Huntington, West Virginia, was set up in the fair’s vendor building, serving up its classic rolled ice cream treats in various flavors. I had previously had the Reese’s peanut butter cup treat at a different time, which was awesome, but opted for the fruity cereal option at the fair. The Fruity Pebbles mixed with the sweet cream to make the treat really tasted like a bowl of Fruity Pebbles, which certainly brought nostalgia. Topped with whipped cream and Fruity Pebbles cereal, what could go wrong?

There are also countless other options of cuisine at the fair, which are definitely worth checking out.

If you are in the mood for some deep-fried goodness or sweet dessert options that you can’t get anywhere else, the county fair is definitely a place to try.

Dustin Melchior is a reporter for The Tribune and can be reached at dustin.melchior@irontontribune.com

Yet another Hep A case at Boyd County restaurant

The Ashland-Boyd County Health Department is reporting its 11th case of hepatitis A this year. The health department reported on... read more