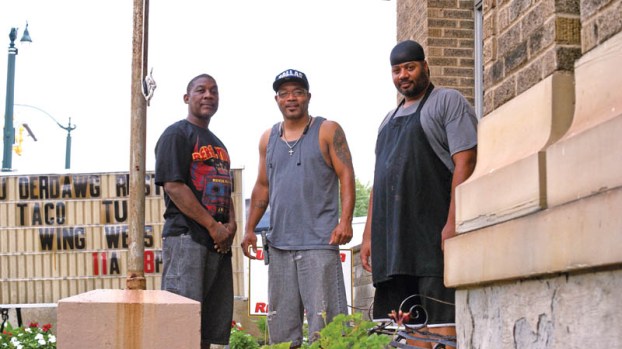 The UnderDawg restaurant is now a staple at Ironton Elks Lodge 177, serving up southern-style food, from chicken wings to burgers to ribs to fried bologna.

Owner DJ Wilson and Kitchen Manager Damon “Day Day” McDade began just grilling burgers and smoking ribs in their backyards before they took their kitchen skills to help open the kitchens at Ashland’s Fat Patty’s, Callihan’s and RJ Kahuna’s sports bar prior to beginning their own business in 2016.

“When we started on our own about a year and a half ago, we set up our food truck outside of Dollar General in Ironton,” McDade said. “The Elks then asked us if we wanted to use their kitchen, and we’ve been here ever since.”

UnderDawg opened up full-time at the Ironton Elks Lodge late last June, serving its menu, along with some new additions.

“We make mostly southern food with a city twist to it,” Wilson said.

Along with UnderDawg’s “All Day Every Day” menu, the restaurant also features “Taco Tuesdays” each Tuesday and “Wing Wednesday” every Wednesday.

“The service and personality of the UnderDawg is unmatched. Add in the great prices, and you have an awesome combination,” JD Thomas, exalted ruler of the Ironton Elks Lodge, said. “In the process, it has brought new members and interests, such as concerts, the Donnie Baker Show and weddings, to our club. Because of the extra traffic, we have been able to give back to the community more now than we have in the past couple years.”

Thomas added that the lodge is proud to not only have those who work for the UnderDawg in the kitchen, but as new members in the order as well.

“I hope that people start to notice where they are,” he said. “They are working hard to feed good people great food.”

In addition to the restaurant at the Elks Lodge, Wilson said the business still has its own equipment in its food truck, and occasionally still sets up and is available for catering.

The UnderDawg at the Ironton Elks Lodge 177 is located at 416 Park Ave., and is open from 11 a.m.-8 p.m. Monday through Friday. Wilson and McDade added that extended and weekend hours may occur during football season.

For more information, visit the UnderDawg’s Facebook page at www.facebook.com/underdawgmobilefoodtruck.

Buildings being razed to make way for new hotel Buildings are coming down around the Gateway Centre in Ironton in... read more