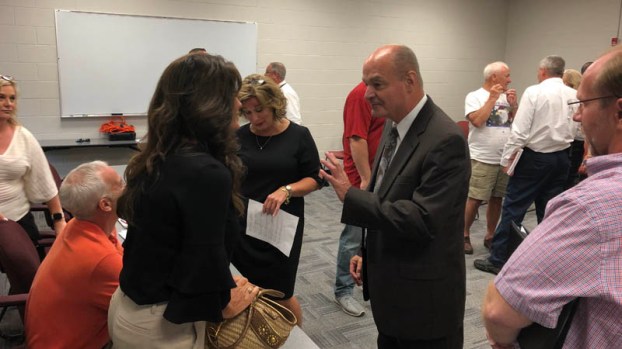 Longtime Rock Hill Superintendent and employee Wes Hairston is congratulated on his retirement by the Lawrence County Commission on Tuesday at Rock Hill. Tuesday marked Hairston’s last day on the job.

Superintendent, employee reflects on his career

PEDRO — Tuesday marked Rock Hill Superintendent Wes Hairston’s last day with the district, as he is retiring after 40 years.

“First, I’m very thankful to have the opportunity to work in my home school district for 40 years,” he said. “I was a 1970 graduate from Rock Hill High School, served as a teacher and a coach for 14 years, the high school assistant principal for eight years, the middle school principal for about eight years and the superintendent for the last nine.”

As the result of a strong financial situation, Hairston’s tenure saw improvements to school facilities, such as new turf for the athletic fields, a resurfaced track and a new scoreboard.

He also put a strong focus on security. New doors, window panels and an improved intercom system were installed in each school, as well as entry restricted to the main door of each building, while door barricade devices were installed for each classroom.

Hairston implemented the training of faculty in firearms, as a preventive measure in response to concerns raised by school shootings.

The district had to face a tragedy in Hairston’s last year on the job, when a Rock Hill Elementary student, Devin Holston, was murdered in the quadruple slayings in Decatur Township in October.

The schools were closed for two days as law enforcement conducted a search and apprehended the suspect. The schools and community rallied in support the family of the victims, showing their solidarity with candlelight ceremonies and balloon launch at that weekend’s football game.

As superintendent, Hairston got to take part in a special honor in 2016, when the schools made 92-year-old World War II veteran Oscar Gannon a member of that year’s graduating class.

A request was filed by the Lawrence County Veterans Service Commission to get Gannon, who served two tours of duty in Hawaii, Japan and Germany, an honorary diploma.

Following approval, a private ceremony took place, in which Hairston spoke and presented a diploma to Gannon, who surprised everyone by showing up in a cap and gown.

Hairston added that he feels very fortunate and blessed to have been able to provide for the district in many different capacities.

“It was a great time, and I enjoyed every minute of it. I wore a lot of different hats for the Rock Hill school district,” he said. “I’m very proud of our district and all that we have accomplished and where we’re heading.”

Taking over for Hairston as the new Rock Hill superintendent is David Hopper, who previously served as the high school principal.