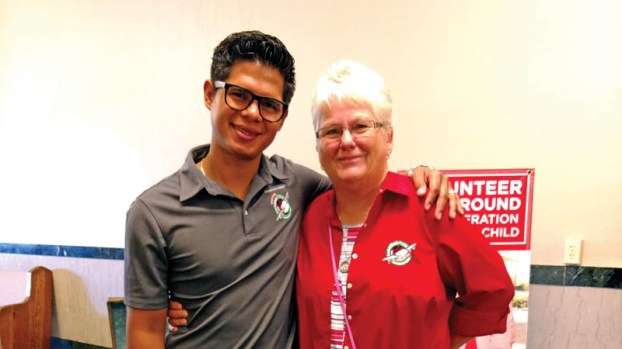 Luis Gonzalez, of Panama, shared his experience of receiving an Operation Christmas Child shoebox when he was younger, back in July. Pictured next to Gonzalez is Vickie Edwards, of Proctorville, a local volunteer for the Samaritan’s Purse project.

Many volunteers spend countless hours stocking up pencils, crayons, notebooks and other school supplies, alongside hygiene products and toys, to fill empty shoeboxes as part of Operation Christmas Child.

Locally, Proctorville residents Vickie and Bud Edwards are just two volunteers for the Samaritan’s Purse project, which delivers the shoeboxes to children around the world affected by war, disease, disaster, famine and poverty.

Luis Gonzalez was one of those grateful recipients, and shared his life-changing story with Vickie Edwards and others last month. Gonzalez recounted that as a 6-year-old, he lived in a “ghetto surrounded by poverty and hate where people steal and kill to survive another day.”

Gonzalez’s single mother and two siblings lived in a tin-walled, dirt-floored house in Panama City, Panama, which also didn’t have running water or indoor plumbing. He said that his mother would leave her children to go work to make money for food, but often times, she’d return home without food. He added that if his neighbors did not have any food to share, he and his family wouldn’t eat.

“Starving was not fun,” he said.

In addition to often not having enough nourishment, Gonzalez also spoke about his drive to receive and education. One time, when he asked his mother for school supplies, she told him she could not afford to buy those things necessary for him to go to school, and that if he wanted to go to school, to pray about it.

Not long after, one of his friends took him to a shoebox distribution, where he received a shoebox filled with a stuffed lamb, toys, candy, a letter and photo from the giving family, and school supplies through Operation Christmas Child.

“My Heavenly Father heard me and answered my prayers through the power of a simple gift. I want to thank everyone who has packed an Operation Christmas Child shoebox because you showed me that I was loved when I was desperate and needed to hear that,” he said. “You gave me an opportunity to go to school when I desperately needed and my mother could not afford it. We can make a difference in the world by showing kindness to others. Maybe, one day, we can see the fruits of our labors. Thank you.”

Gonzalez’s story is just one of so many similar children around the world through the Samaritan’s Purse Operation Christmas Child project.

Samaritan’s Purse is an international relief and evangelism organization headed by Franklin Graham.