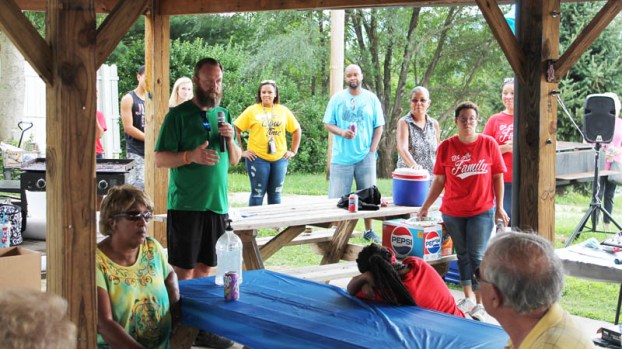 Lawrence County Common Pleas Judge Andy Ballard speaks during a cookout Saturday at the Burlington Commons Park for those involved with his drug court.

Event put on by Concerned Citizens of Burlington

The event was put on by the Concerned Citizens of the Burlington Area after one of the group’s members, Tamara Jones, began attending Ballard’s drug court sessions as a community supporter.

“One of the things that they always talk about in there is the drug court participants’ support systems,” Jones said. “I approached Judge Ballard about having this picnic with him, the treatment team and the participants, and he was all for it.”

Natalie Adams, with the Nexus Recovery Docket’s treatment team, agreed and said the drug court has been going very well since it began.

“We’ve been going since April and have had really good success with it,” Adams said. “We’re always talking to our participants about their support systems, and this gives us a chance to meet them and for them to meet us.”

Adams said that currently there are seven participants in the drug court, and although no one has completed the program yet, one participant has successfully moved into the second phase.

“He was actually able to get his nursing license back because of the drug court,” she said. “It’s been a great success so far.”

Before the crowd began to eat, Ballard spoke about the drug court and what it meant to be able to have the cookout.

“Once word got out that this event would happen today, donations and volunteers started coming in. Someone even stuck $50 in an envelope for Tamara (Jones) for this event,” Ballard said. “People in the community want to see continued success and be a small part of this.”

He added that having the community support that his drug court has seen means a lot.