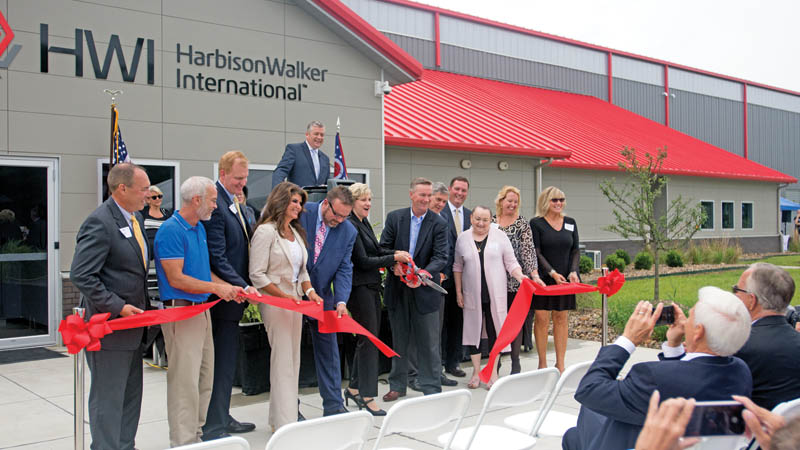 And, on Tuesday, the result of a year of work was evident, when the company hosted the ribbon cutting on its new 120,000-square foot plant at The Point industrial park.

“What an exciting day for HarbisonWalker International and our region,” CEO Carol Jackson told the crowd. “Welcome to our South Point plant.”

She said that many had told the company that it would take two years to build the facility.

“Yet here we are, one year later, and this a pretty darn good-looking plant,” Jackson said.

The monolithic refractories facility, which employs 40, is the result of a $30 million investment by the Pennsylvania-based company into Lawrence County.

Jackson said the facility is state of the art and the culmination of the company’s efforts over the past few years to “transform itself inside and out.”

“Our new South Point plant truly represents the future of HarbisonWalker International,” she said. “Everything about this facility represents our unwavering commitment to driving things forward.”

The South Point facility is the first new plant built by the company since 1978. Jackson said HWI has 19 manufacturing plants and 30 global source centers.

HWI, the largest refractories company in the U.S., produces heat and chemical-resistant materials used in manufacturing.

“You really can’t make anything without our products,” Jackson said of their importance in manufacturing.

Samples of the first batch of product, produced at the plant on March 18, were available in jars as souvenirs for the invited guests at the ceremony, which included local politicians and leaders, HWI customers, plant workers and their families.

Gildous Dupouy, senior director of operations, said South Point was chosen, in part, because of its transportation infrastructure, including rail lines and access to the Ohio River.

“The transportation here at The Point allows us to bring raw material from our suppliers and to deliver our products worldwide,” he said.

Dupouy said the plant is unique from others in the industry because of its “genius design,” which he said maximizes the flow of material and increases the facility’s operation efficiency.

“It integrates all of the equipment we have and is a giant step forward in manufacturing,” he said.

Kevin Ballard, the senior director of engineering, echoed that sentiment, stating that the site’s design had years of though put into it.

“What you see here is the realization of a long vision,” he said.

Jackson thanked the community for its support and said they were especially thankful of the Lawrence County Economic Development Corporation, which oversees The Point and lured HWI to South Point.

“LEDC has done an exceptional job,” she said. “They have provided information, assistance and regional leadership to make this project a reality.”

In thanks to the community and to demonstrate the company’s interest in being a good neighbor, Jackson called up Sam Hale, leader of Boy Scout troop 106 of Ironton, who had handled presentation of colors at the beginning of the ceremony.

She then presented the group with a donation, to show their appreciation.

She then did the same for South Point High School’s marching band, who opened the ceremony with “America the Beautiful.”

“As one who appreciates music, thank you for spreading the joy of music,” she said.

Robert Slack of the LEDC, then called Jerry Greenslate, the pastor of South Point Christian Christian Church to the stage.

The church had used the lot, on the edge of the HWI property for parking, leasing it for $1 a year.

Slack then announced that the company was giving the church the deed to that portion of the property.

“This is another instance of them being a good community partner,” he said. Greenslate thanked them and then joked, “I already paid for this year. If I’d known about this, I could have saved a dollar.”

Steven Sternburger, a director with HWI, then gave Greenslate a dollar as well, to laughs from the crowd.

Ryan Smith, speaker of the Ohio House of Representatives, whose district covers South Point, was present for the ceremony.

“Thank you for choosing southern Ohio, for your commitment to this project and, most of all, for employing so many people,” Smith said. “That’s what it’s all about for us.”

Representing the village of South Point was Mayor Jeff Gaskin, who said residents had been watching progress of n the site “since it was a dirt lot.”

“The neighbors have watched it grow,” he said. “We’re proud of it and are glad that you’re here.”

State Sen. Bob Peterson, said that the workforce in the region would “serve the company well.”

He also complimented the building’s scarlet and grey color scheme.

“As a Buckeye, I know our southern border is well protected,” he said.

Peterson summed up the mood of the gathering.

“Groundbreakings are a lot of fun, but grand openings are even better,” he said.

Following the ceremony, guests were given tours of the plant, which Jackson said is now at full operation.

“We’ve been commercial since April,” she said.