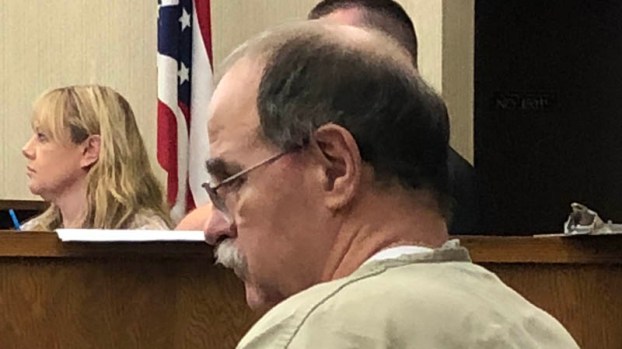 Frank J. Thacker, 54, of South Point, was sentenced to 27 years in prison on Wednesday for a case involving rape and kidnapping.

Must register as tier III sex offender for rest of life

A South Point man who was found guilty in a case involving rape and kidnapping was sentenced to 27 years in prison Wednesday in the courtroom of Lawrence County Common Pleas Judge Andy Ballard.

Frank J. Thacker, 54, of 203 Township Road 1034, South Point, was on trial last week for an incident in February of this year involving a single victim. During the pretrial process, Thacker pleaded not guilty by reason of insanity to his indictment, which included three counts of rape, all first-degree felonies, one count of burglary, a second-degree felony, two counts of kidnapping, both second-degree felonies, and one count of abduction, a third-degree felony, with a gun specification, to which he was found competent to stand trial.

Following his trial, a Lawrence County jury found Thacker guilty on one of the rape counts, burglary, one of the two kidnapping counts and abduction. At the sentencing on Wednesday, assistant Lawrence County prosecutor Jeff Smith, who was trying the case, said part of the sentencing agreement involved the abduction charge going into the kidnapping charge, thus absolving the gun specification in the abduction charge.

Prior to sentencing, the victim in the case spoke about the continuing hardships she faces on a daily basis as a result of the incident, such as not feeling safe in her own home and not being able to sleep in months, but added that she forgives him.

Following sentencing, Thacker’s attorney, Adam Slone, said that Thacker was going to appeal, and Ballard appointed attorney Mike Davenport as appellate counsel. As a result of this case, Thacker’s DNA evidence also came back as a match to a cold December 1999 case, also involving a single victim, where he was then charged with an additional three counts of rape, all first-degree felonies, one count of kidnapping, also a first-degree felony, and one count of abduction, a felony of the third-degree.

Thacker previously pleaded not guilty to the second case, and Ballard set a pretrial in that case for Sept. 12. Trial will begin on Tuesday, Nov. 6, and attorney Gene Meadows was appointed to represent Thacker.

Bond would aid in funding FRANKLIN FURNACE — Green Local Schools are home to about 600 students, from kindergarten through... read more